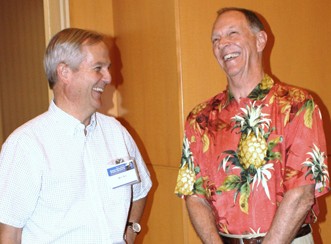 Randy Babbitt, former FAA Administrator was on hand to deliver the keynote luncheon address for day two of the Phoenix International Aviation Symposium. Babbitt joked that today the audience was getting "Babbitt unplugged."  The former FAA head was given a standing ovation after his talk which was, in his own words, unrestrained from the typical political strings attached to a federal agency head. However, Babbitt didn’t stray too far in his talk which briefly touched on NextGen, airports, system infrastructure, equipage and funding.

Babbitt did suggest that their is room within the FAA to look at greater efficiencies and better funding choices. Babbitt acknowledged passage of the new FAA funding bill but did say that he may be the only administrator whose term saw nothing but continuing resolutions.
Today’s agenda also included sessions on airline customers, airline finance and network issues, loyalty programs and the airline industry as a whole.  The topic of progress and challenges was discussed by an executive panel made up of Doug Parker, Chairman and CEO of US Airways Group, Willie Walsh, CEO of International Airlines Group, Dave Cush, President and Chief Executive Officer with Virgin America and Ben Baldanza, President and Chief Executive Officer of Spirit Airlines.
(Pictured at top are, Babbitt, right, with Will Ris, Sr. V.P., AMR Corp.  Photo at left. Panel members include, from left, Scott McCartney, Wall Street Journal, moderator, Nicholas Calio, President & CEO of Airlines for America, Captain Lee Moak, President of Air Line Pilots Association, Bradford Rich, President of SkyWest, Inc., and Will Ris, Senior Vice President of AMR Corp.)
Look for more coverage in the next issue of the State Aviation Journal e-magazine.
Attachment: