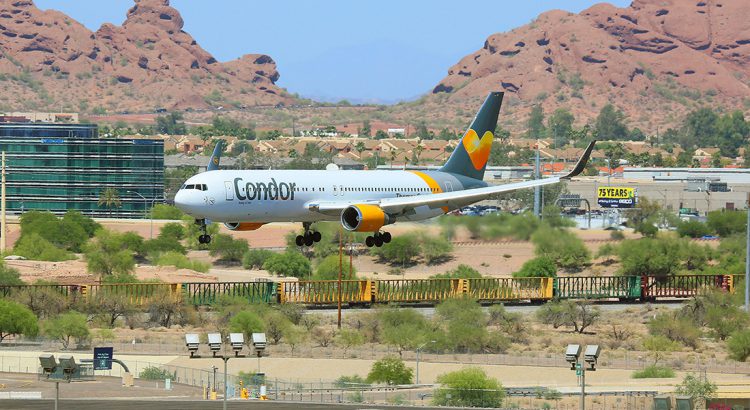 Condor Airlines continues to see strong demand with its nonstop Phoenix-Frankfurt flight, and as a result, has extended its service in 2020. Next year, Condor will expand its current service, adding two days a week for the month of April, then, continue its three day a week service from May to October.

Condor Airlines began nonstop seasonal service from Phoenix Sky Harbor to Frankfurt in May 2018. Last June, the airline announced that it would extend its 2019 seasonal service by two full months to include all of May and October. Now, as a result of continued demand, the airline is further extending its service.

Condor Airlines, which is part of the Thomas Cook Group, will continue to operate the flight with a Boeing 767-300ER. This aircraft offers more than 250 seats. Each passenger on board receives complimentary checked baggage, beverages, meals and in-flight entertainment at each seat. The 18 seats in Business Class feature lie-flat seats, a 15” personal in-seat premium entertainment system, power and USB ports, and gourmet meals with complimentary beer, wine and cocktails.

This service will continue to provide both business and leisure travelers a convenient option to getting to Europe. Those travelers looking to fly to other European destinations will find Condor’s schedule and route offerings to 90 destinations from Frankfurt, make it easy and time-effective to get to where they want to go. The flight will also continue to provide a boost to the Arizona economy. In fact, international flights to Phoenix bring in approximately $3 billion each year.

Phoenix Sky Harbor International Airport continues to focus on bringing new flight options to travelers. In addition to the extended Frankfurt service, Phoenix has seen new service from American Airlines to London, new service to Puerto Vallarta on Volaris, and increased service to Montreal on Air Canada. Phoenix Sky Harbor is not only America’s Friendliest Airport®, but a convenient international gateway to destinations across the US and abroad with flights to more than 100 domestic destinations and 23 international destinations. For more information on new flight options, please visit skyharbor.com/flyphx.