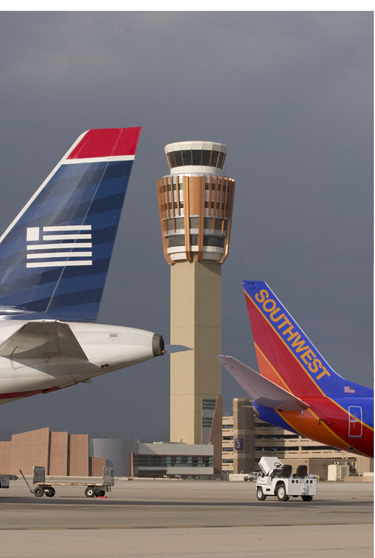 The City of Phoenix has selected the Aerobahn airport surface management system from Saab Sensis for use at Phoenix Sky Harbor International Airport. The City will use Aerobahn to manage airport resources, such as gates and the ramp area, and during irregular operations for improved efficiency, planning and responsiveness.

"Aerobahn provides the City of Phoenix with the same platform and Decision Support Tools already in use by the airport’s largest carrier, US Airways to foster greater collaboration and operational efficiencies," said Ken Kaminski, senior vice president of Saab Sensis. "This added insight into real time airport surface conditions will also help manage irregular operations such as extreme weather events."

Aerobahn also has a number of customizable tools that enable responsive management of surface operations, including departure/arrival queues, runway use status, and traffic flow monitoring—resulting in less emissions and improved operational performance. All events are recorded for future playback to identify trends and develop new procedures to mitigate delays or similar events in the future. Aerobahn also provides users with the ability to create reports based on numerous variables for detailed analysis of operations.

Aerobahn is the most widely deployed airport surface management system in the industry, being used by airlines, airport operators and air navigation service providers across the globe, including US Airways at Phoenix Sky Harbor.