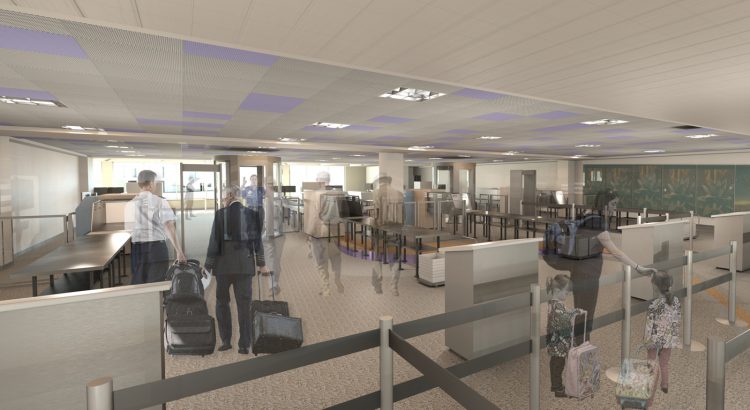 The new Transportation Security Administration checkpoint serves the airport’s B Concourse, which is used by Alaska, American and Delta airlines.

The Terminal Optimization Program is the largest of several construction projects encompassed under the airport’s ‘A Brighter TUS’ improvements. To achieve their goal, the design and construction team opened up a once dark portion of the terminal with glass facades that allow for optimal daylight and grand views to the airfield as passengers advance through the security checkpoint. By opening up the terminal, the design embraces the unique location in Tucson, connecting passengers to the outdoors with views to distant vistas and integrating an Arizona color palette.

Focused on recapturing under-used space and modernizing terminal finishes, the checkpoint for the B Concourse has been relocated to the far west end of the terminal with an expanded configuration for the TSA’s security equipment. A “recomposure” area gives passengers space to gather their belongings after passing through security. Other improvements include a business center, colored terrazzo flooring for intuitive wayfinding and major infrastructure upgrades. Supporting the mission to provide a new face for TUS and the community of Tucson, these infrastructure and aesthetic upgrades position the airport for success for years to come.

“We’re extremely excited about the new checkpoint opening. The improved queuing, expanded lanes, brighter views and added recomposure area are something that will elevate the passenger experience. The opening of this checkpoint brings us one step closer in completing our terminal optimization project, and this is just the beginning of a year that will truly bring ‘A Brighter TUS’ to customers,” Tucson Airport Authority President and CEO Bonnie Allin said. “From the desert themed colors to the natural light brought in from the windows overlooking the Santa Rita mountain range, our passengers will truly feel like they’re in Tucson during the process of departing Tucson International Airport.”

“As aviation architects, we understand the business of aviation is evolving, including the check-in and security checkpoint processes. With this project, we focused on transforming the checkpoint into an integral component of the terminal with an open design for increased visibility and intuitive passenger flow,” said Sandra Kukla, principal in charge with DWL Architects + Planners.  By creating a more efficient design, Terminal Security Checkpoint B has the capacity to expand to four lanes, with the entire terminal having the infrastructure to expand to 10 lanes in the future.

As the general contractor for this project, Sundt Construction has now completed three projects at Tucson International Airport. “We are pleased to continue the great relationship we have with Tucson Airport Authority and help them as they look for new opportunities to better serve their customers,” said David Ollanik, Project Director. “The upgrades we’re making to the electrical and communications systems will allow the airport to grow over the next 20 years.’”

By completing the Terminal Optimization Project in phases, and with the help of Hill International as the Program Manager/Construction Manager, the team has kept the airport operational through construction, with the final phase coming in November 2017. Travelers can look forward to an elevated passenger experience with the opening of Security Checkpoint A, upgraded terrazzo throughout the entire concourse and baggage claim, a children’s play area, additional infrastructure upgrades and modernized finishes and amenities.