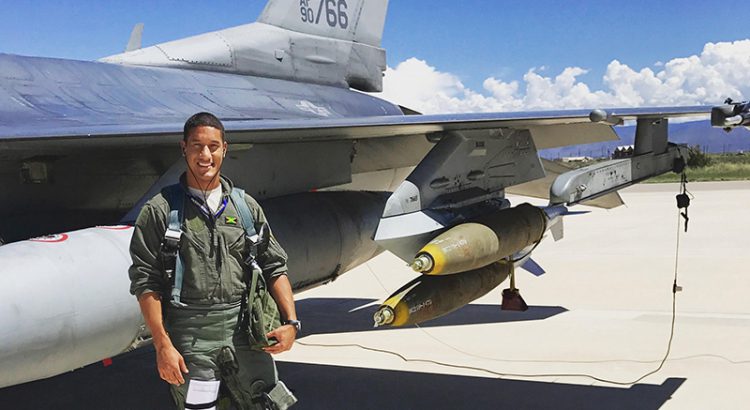 For Captain Alex “SANKA” Anderegg flying the F-16 is an absolute thrill. “The speed, pulling Gs, and employing the jet as a weapon never gets old,” said the pilot who flies for the 187th Fighter Wing of the Alabama Air National Guard based at Montgomery’s Dannelly Field. “It’s an extremely perishable skill too, so it’s always challenging to keep those skills fresh.”

As with many pilots, Capt. Anderegg became interested in aviation at a very young age. “My uncle was a pilot for Air Jamaica, and he would send me little model airplanes of the jets that he flew,” said Capt. Anderegg. “Also, growing up in my hometown of Muskegon, Michigan, there was an air show every summer that I would always attend. Watching the planes fly was always so fascinating to me. Even today, I can sit at an airport and just watch planes fly for hours. I love everything about it. It was at a very young age that I knew I wanted to be a pilot.”

Capt. Anderegg flies in the 100th Fighter Squadron, which is one of the four original Tuskegee Airman squadrons that made up the 332nd Fighter Group during WWII. “That is our direct lineage, and we still wear the same patch today that they wore during WWII,” said Capt. Anderegg. Surprisingly enough, it did not play into his decision to join the military. “My grandfather served after WWII and seeing pictures and hearing about his time in the service sparked my interest.”

As cliché as it might sound, having seen the movie Top Gun at the age of about nine or 10 is what really sparked his interest to fly in the military. After having seen that movie, he took a keen interest in the military aircraft performing at local air shows. The speed, raw power, and noise from those jets drew him in “like a moth to a flame.” In 2014 when he was applying to Air National Guard units, he came across the 100th Fighter Squadron. “Upon looking up the history of the squadron, I discovered it’s true significance in military history, which, as an African-American pilot, made me want to fly for the squadron that much more.”

Capt. Anderegg, who has experience in over 30 different types of aircraft, is passionate about sharing his love for flight with others. He volunteers with the Red Tail Scholarship Foundation, a non-profit organization that focuses on training young African-American students in the aviation field.

It’s the Captain’s parents who inspire him the most. As a young adult now, he is experiencing firsthand the challenges in his career and in life in general. “The sacrifices and selflessness shown by my parents to help me achieve my flying goals, is something I now truly appreciate,” noted Capt. Anderegg. “If it wasn’t for my parents, and many other friends and mentors I’ve met along the way, I wouldn’t be where I am today. They are who inspire me to do the same, to aspiring pilots looking to enter the industry.”

Capt. Anderegg’s callsign is ‘SANKA.’ Traditionally, to hear the story behind a callsign, you have to buy the individual an adult beverage. Callsigns spelled in all capital letters signify it is an acronym, and callsigns usually stem from “buffonerous mistakes” made during flight upgrades. “Let’s just suffice it to say that my callsign stems from my Jamaican heritage and a character from the movie Cool Runnings. I’ll let you and the readers do some research on that if you’re interested!”

Alex “SANKA” Anderegg was born and raised in Norton Shores, Michigan. He took his first flying lessons and soloed at the age of 16. Before graduating from high school, Alex earned his Private Pilot’s License and Instrument Rating, then attended Western Michigan University where he studied Aviation Flight Science while continuing his professional flight training. During his time at Western Michigan University, Alex also served as a Certified Flight Instructor within WMU’s aviation program.

In 2014, Alex joined the Alabama Air National Guard where he currently serves as an active F-16 fighter pilot with the “Red Tails” of the historic 100th Fighter Squadron – one of the four original Tuskegee Airmen squadrons during WWII, still active today. Since 2018, Alex has served in the role of a Check Instructor Pilot, conducting pre-solo and pre-checkride phase evaluations for foundation students. Alex holds a Multi-Engine Airline Transport Pilot Certificate with experience in over 30 different types of general aviation, corporate, and high-performance military aircraft.