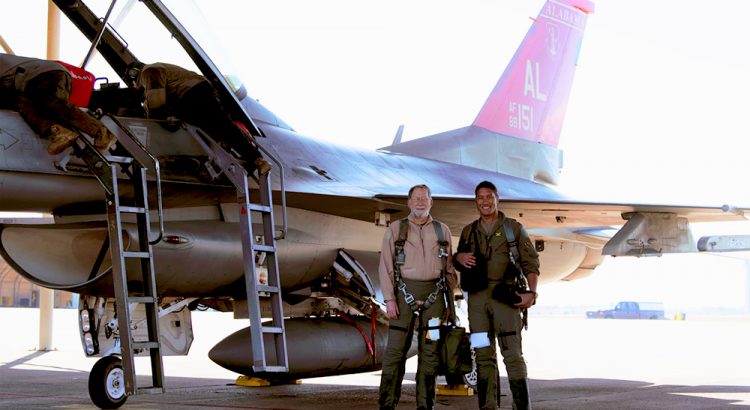 On February 17th I had the thrill of a lifetime and the privilege to fly the F-16 Fighting Falcon courtesy of the 187th Fighter Wing of the Alabama Air National Guard based at Montgomery’s Dannelly Field.  The 187th is part of the famed 100th Fighter Squadron which was one of the original units of the Tuskegee Airmen.  I also owe a big thank you to the pilot, Captain Alex “SANKA” Anderegg, for making it a memorable experience.  I can think of no better way to start off retirement!

The groundwork for this familiarization flight was laid in March of 2016 at a dinner in Montgomery to raise money for student scholarships for the Tuskegee Airmen Foundation.  At that dinner I was introduced to the then 187th Wing Commander by a mutual friend, Col. Al Allenback, USAF, Retired.  The Wing Commander and I chatted for a few moments and the idea for a flight in the F-16 came up in the conversation.  And I failed to follow up!  Fast forward to sometime in 2019 and I had a chance encounter with the Wing Commander and we again discussed an F-16 flight.  I followed through this time, submitted the paperwork required for getting a flight approved, and then waited.  In late 2019 I was notified that I had been approved for a flight and in early 2020 I was put on the schedule for a flight in the early Spring.  But the COVID-19 pandemic intervened, and the flight got indefinitely postponed.  Late in the year, however, I was notified that my courtesy flight was back on the schedule and set for February 17, 2021.  I had a firm date!

To prepare for the familiarization flight I did a bit of reading and YouTube “research” (if you can call it that) on the F-16 just to get an idea of what I was in for during the flight.  About a week before the takeoff, I had to visit the Wing’s flight physician to get the all-clear.  One of the things I was surprised to find out is that you must be within certain physical dimensions to fit in the cockpit.  For example, your torso has to be within certain physical limits, so the canopy won’t treat you like a trash compactor.  Although I passed this part of the physical, the cockpit was still a snug fit as I later found out!  On the day prior to the flight, I attended a morning egress training session where I got fitted for a helmet, G-suit and harness.  The support crew did a great job getting me fitted.  I also learned about the cockpit layout, which knobs and switches that I shouldn’t touch and the ejection system.  Two things I learned that stuck with me; the ejection is a violent ride and parachutes sometimes fail.  Oh, I also learned not to grab the ejection handle for something to hold on to.

On the day of the flight, I arrived on base at 7:15 a.m., suited up and met Captain Anderegg for the first time.  I was immediately impressed with his professionalism and dedication to his mission.  Also, I was quickly put at ease with how he was approaching the flight that morning with someone who had never experienced flying in a fighter jet.  I was reassured that it was his job to make the flight one that I would enjoy; it was not his assignment to scare the hell out of me.   I received a thorough briefing of the flight, which would last approximately one hour, and we discussed the air work we would do.  And then it was out to the flight line to get familiarized with the “City of Eufaula,” the F-16 we would be flying that morning.  A word about the weather, it was the first clear morning we had had in about 10 days so I must be living right!

The flight itself was an amazing experience and I got to observe what the aircraft is capable of, which is far more than what I’m capable of handling.  Even with the pressure suit, I discovered that 5 G’s is about my limit.  While I’m proud to say I returned the sick sack unused, I will admit that those G-forces were tough on a 68-year-old “airframe” like mine.  The biggest thrill though was actually getting to fly the F-16 myself.  What was really interesting to learn is that the side stick only moves about ¼ inch in any direction.  Compared to all the other aircraft I’ve flown, including a P-51, the performance of the F-16 is indescribable.  Words can’t adequately describe all the sensations I experienced.  If a picture is worth a thousand words, a video should fill a book.  You can see a bit of the flight in an 18-minute video I uploaded to YouTube at https://youtu.be/oXNRF0MIDv8.  (shameless plug alert; please leave a comment and thumbs up!)

One other thing made this flight particularly memorable for me personally.  As I mentioned, the wing’s 100th Fighter Squadron is descended from the 100th Fighter Squadron of the “Redtails,” the Tuskegee Airmen who distinguished themselves with their bravery and heroism during World War II. (See companion articles below)  Like the F-16 I flew, the tails of some of the F-16 aircraft are painted red today to remember and pay tribute to the heritage of the Tuskegee Airmen. Having had the privilege to fly with the 187th with a young African American pilot during Black History month made my flight all the more rewarding for me.

Dr. John Eagerton retired on January 1st after 27 years of dedicated and outstanding service to the Alabama Department of Transportation as Aeronautics Director and Chief of the Aeronautics Bureau.