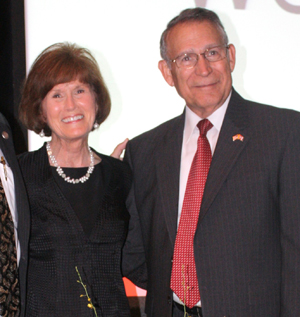 The National Association of State Aviation Officials, (NASAO) and state aviation is losing one of its most passionate and successful advocates in a couple of weeks. Brigadier General Robert V. Woods (USAF Ret.), announced his retirement as Director of the Tennessee Aeronautics Division effective November 4th. This, coming on the heels of the Division hosting a very successful NASAO annual conference in Nashville.

Woods, who began his career in state aviation as the Deputy Director in Texas for close to eight years, led the Tennessee Division of Aeronautics for nearly a dozen. According to NASAO, during that long period of state service Bob has been one of that organization’s most active and dynamic members – serving on the Board of Directors as well as serving and chairing several committees. He and his wife Wanda (who also led the Nashville planning group) have been regular, active and dependable participants in most NASAO Spring and Autumn conferences.(Photo – Bob and Wanda Woods – By Kim Stevens)

Woods communicated through NASAO that he wants his friends and colleagues to know that he is not retiring from aviation and that he will continue to be seen around the pattern in the future.