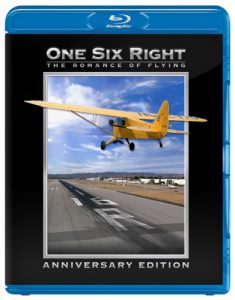 One Six Right: The Romance of Flying is one of the most popular aviation films ever produced that celebrates a passion for general aviation. And now the documentary, which was originally released in 2005, has been completely remastered in 1080p and released on Blu-ray. This 10th anniversary version enhances the visuals seen and makes all those wonderful scenes of aircraft appear sharper and cleaner when watching the film.

One Six Right focuses on the importance of general aviation from the perspective of and history surrounding the famous Van Nuys airport in California. Featuring a number of guest speakers interviewed throughout the documentary, viewers of the film will hear stories of experiences and pure joy for the world of aviation while also discussing some of the struggles that GA encounters from the decreasing amount of airports and noise that surrounds them.

Those who are familiar with the film already will not only be pleased by the enhanced visuals for the Blu-ray addition, but will also enjoy 7 brand-new special features that have been added to the Blu-ray that was not previously available on the origional DVD versions of the film. This includes 10 minutes of new aircraft footage in high definition, such as new air-to-air footage set to music.

Anyone who has the slightest interest in aviation can sit down and easily enjoy this documentary and its special features. It’s almost as good as being at the actual airport and hearing stories from people there. The One Six Right Anniversary Edition can be purchased from Amazon for $29.95.