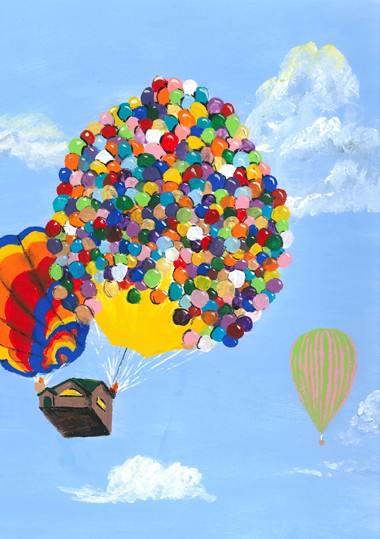 Officials with the Oklahoma Aeronautics Commission have announced the winners of Oklahoma’s 2012 International Aviation Art Contest. The students will be recognized for their artwork during an awards ceremony scheduled for April 19 at 2 p.m. in the Governor’s Blue Room at the state Capital.

"We must get young people interested in careers in aviation,” said Commission Director Victor Bird. “The fact is that we are not replacing the aviation work force that won us the Space Race and Cold War. We’ve got to get them at an early age, and events like this are one of the best ways to do that.”
In addition to certificates recognizing their achievements, first-place winners in each age category will receive $100 for their accomplishments, while the second-place winners will receive $75. Third-place winners will each receive $50.
The international art contest encourages youth from around the world, ages 6 to 17, to reflect on aviation by designing a piece of art based on the year’s chosen theme. This year’s contest theme was “Silent Flight.”
In the Senior Division, ages 14-17, Guymon’s Estefania Gonzalez was awarded first place, while schoolmate Eh Say Doh earned third-place accolades. Reece McQueen of Langley, who attends Ketchum Middle School, took second place. McQueen previously won top honors in the Intermediate Division for both the 2009 and 2010 aviation art contests. Last year, he placed second in the Senior Division
Amanda Boozer from Moore, who attends Heritage Trails Elementary, was the first-place winner in the Intermediate Division, ages 10-13. Braden Rodgers and Brenna Rodgers, twin brother and sister from Meeker Elementary School, finished in second and third place, respectively. This marks the third consecutive year that Braden and Brenna have either placed first, second or third in the state’s aviation art contest.
In the Junior Division, ages 6 to 9, Thomas Buchanan from Newalla, who attends Clara Reynolds Elementary in Harrah, took home first prize. There was no second-place or third-place winner in the Junior category.
Judges for this year’s art contest were Glen Henry, director of arts education at the Oklahoma Department of Education, and Melissa Graffigna, aviation and space education program manager with the Federal Aviation Administration.
The top three entries for the Senior and Intermediate divisions, along with the lone winner in the Junior Division, were forwarded to Washington, D.C., where they competed in the national contest.
The 2012 International Aviation Art Contest is sponsored, in large part, by the National Aeronautic Association, Federation Aeronautique Internationale, National Association of State Aviation Officials, Embry-Riddle Aeronautical University, National Coalition for Aviation and Space Education, FAA and the Ken Cook Co.
See related article at AVED Journal.
Attachment: