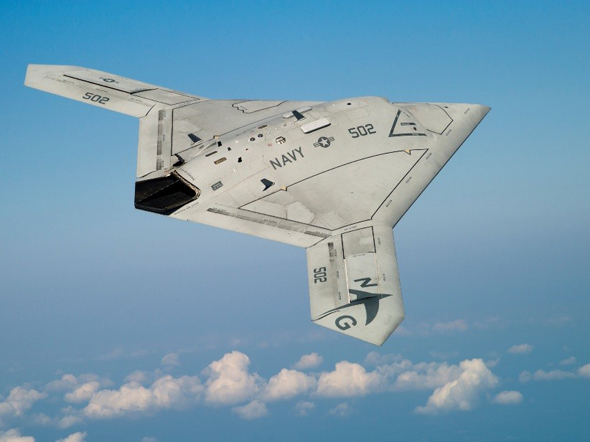 The National Aeronautic Association (NAA) has announced that the Northrop Grumman, the U.S. Navy, and the X-47B Industry Team has been named as the recipient of the 2013 Robert J. Collier Trophy “… for developing and demonstrating the first unmanned, autonomous air system operating from an aircraft carrier.”

The Collier Trophy is awarded annually “… for the greatest achievement in aeronautics or astronautics in America, with respect to improving the performance, efficiency, and safety of air or space vehicles, the value of which has been thoroughly demonstrated by actual use during the preceding year.” The list of Collier recipients represents a timeline of air and space achievements, marking major events in the history of flight.

“The array of advancement and achievement in aerospace was on full display in our 7 hours of Collier Selection,” said Walter Boyne, Chairman of NAA and Chairman of the Selection Committee. “The nominations and presentations were exceptional and the discussions reflected the challenge that we had to select one. I want to congratulate Northrop Grumman, the United States Navy, and their team for the X-47B – it is a remarkable accomplishment.”

Jonathan Gaffney, President and CEO of NAA, managed the selection process. “The diversity of the nominations as well as the background and expertise of the Selection Committee really reflects the timeless value of the Collier Trophy,” he said. “For 103 years it has marked the relentless advancement of the aviation and aerospace industry – and this year continues that history. I am extremely grateful for all the work put into this process by nominees and selection committee members.”