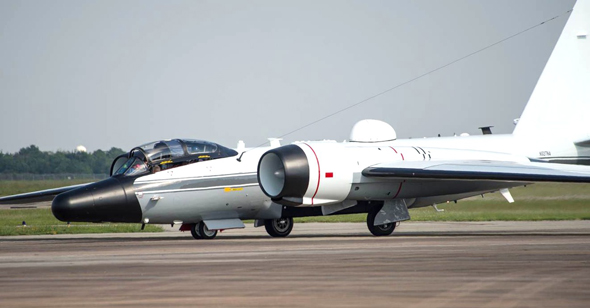 NASA will bring a Martin/General Dynamics WB-57F high-altitude aircraft to EAA AirVenture Oshkosh 2014, the first appearance by a WB-57F at AirVenture, which is July 28-Aug. 3 at Wittman Regional Airport in Oshkosh.

Based at Ellington Field near NASA’s Johnson Space Center in Houston, Texas, the WB-57F operates in NASA’s High Altitude Research Program. The aircraft provides unique, high-altitude (up to 70,000 feet) airborne platforms to government agencies and other customers for scientific research, advanced technology development, and testing.

“The WB-57 shows the brilliance and longevity of the innovation that came from the early jet era,” said Jack Pelton, EAA chairman of the board. “The addition of this aircraft on our main plaza again shows that you’ll discover a collection of aircraft each year at Oshkosh that you’ll see together nowhere else in the world.”

The Air Force originally purchased 21 WB-57F aircraft. The airplanes’ ability to reach altitudes over 65,000 feet, carry payloads in excess of 4,000 lbs, and its triple spar wings made it a very capable high-altitude platform. Missions included everything from weather reconnaissance for Apollo space launches to sampling radiation in nuclear weapon test plumes.

In the late 1960s and early 1970s, the Air Force grounded the WB-57F, but gave three of them to NASA. Another airframe, N927NA, joined the fleet in 2011 after been taken out of the 309th Aerospace Maintenance and Regeneration Group, (AMARG), better known as the “Bone Yard,” at Davis-Monthan Air Force Base, Arizona. That aircraft had been in storage for over 40 years and made its first flight in 41 years in the summer of 2013, setting a record for the longest an aircraft had sat in the Bone Yard before returning to flying status.

Exact arrival at Oshkosh is to be determined, but plans are for the WB-57F to be on display for the entire week.