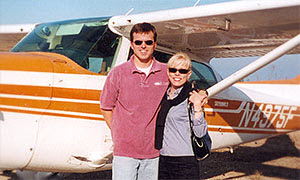 Brad Colbert (shown at right) of Encinitas, California and Kevin Bishop of Stuart, Florida are the most recent winners of Lightspeed Aviation’s $500 Burger Getaway sweepstakes. Each will receive a $500 package that includes gift cards for av gas, rental car, dining, and lodging.

Brad became hooked on flying when, at the age of thirteen, his father invited him to go flying in a Cessna 172. Fifteen years later he had earned his PSEL and has since flown with friends and family on both short and long trips. His most memorable flight was a trip from Quantico, Virginia to San Diego and back in a Piper Warrior. Brad’s flying has tapered since having two boys seven years ago, but he hopes the new Zulu.2 ANR headset he recently purchased—along with his $500 Burger Getaway package—will be all motivation he needs to get back into the air.

Kevin, having grown up on the space coast of Florida, has always had an interest in aviation and flying. He started pursuing a pilot’s license in 1978, but it wasn’t until he and his business partner purchased a Grumman Traveler in 1999 that he earned his PPL. Since then, he has flown a variety of aircraft, including a Piper 140, Cessna P210, Piper Tri Pacer, Cessna 172, Grumman AA1, and a Cessna 150 Aerobat. Kevin flies simply for the joy of flying, and enjoys taking leisurely trips to points all over Florida, the Keys, and the Bahamas. He now owns a Cessna 150A that he spent two years refurbishing. Kevin plans to use his winnings to fly his wife to Cedar Key for a weekend getaway, in celebration of their 36th wedding anniversary.

“We want to congratulate Brad and Kevin as the latest winners of the $500 Burger getaway promotion,” said Teresa De Mers, Executive Vice President of Sales, Marketing, and Customer Support for Lightspeed. “Their stories exemplify everything that we all love about aviation and we are honored that we could recognize them with this reward—and that they choose to fly with Lightspeed headsets.”

The $500 Burger Getaway weekly drawings ended January 7, 2014, but you can still see the winners and read their stories at LightspeedAviation.com/500DollarBurger.