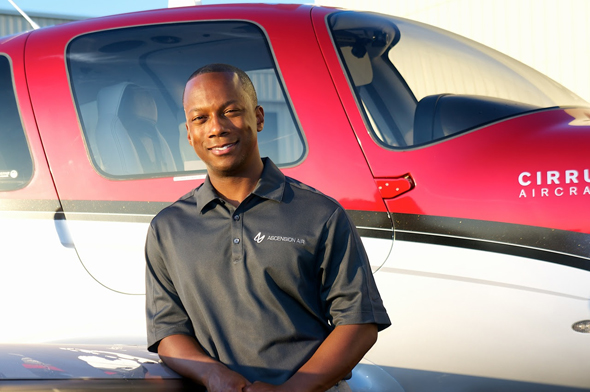 Forbes magazine has named Ascension Air President and CEO Jamail Larkins, 29, as one of the brightest under 30 stars in 15 different fields. In the magazine article, Forbes called out Larkins with a photo feature as representative of the young leaders in the Energy & Industry sector. Forbes identified 450 up and comers in 15 categories that could have a big impact in the future. A panel of venture capitalists and executives in each respective industry selected the people profiled. (Photo – Ascension CEO Jamail Larkins)

Larkins was among an elite crowd which included Evan Spiegel (founder of SnapChat), Maria Sharapova, Bruno Mars, and LeBron James. Larkins was selected for bringing attention to the personally flown fractional market and execution of his vision with Ascension Air.

In singling out Larkins for the honor, Forbes wrote: He started flying at the age of 12 and was immediately hooked. While still a teen he sold instructional aviation manuals and equipment and also performed in air shows. In 2006 he formed a joint venture with an established broker to sell general aviation aircraft. His Ascension Air now sees $8 million in annual revenue and is a leading regional distributor for Cirrus Aircraft, the top manufacturer of piston-driven planes. But the most popular propeller-driven craft costs $850,000, and most pilots fly only four or five days a month, so Larkins is focusing on selling fractional ownership. “I want to become the NetJets of piston-driven aircraft.”
For the Forbes feature on Larkins go to:
http://www.forbes.com/special-report/2014/30-under-30/energy-and-industry.html