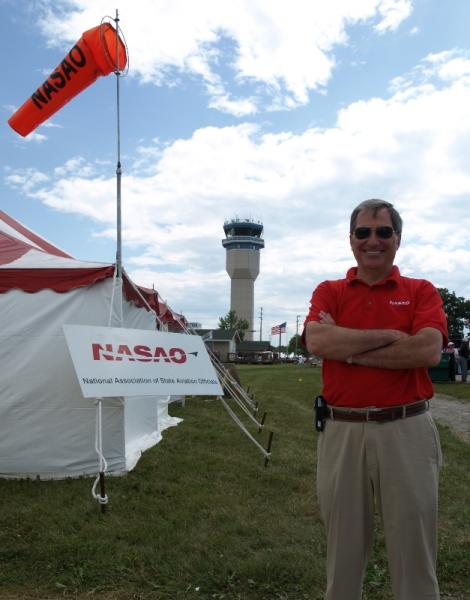 Change was certainly a theme at the opening of this year’s AirVenture 2009 in Oshkosh, Wisconsin. Sometimes the more familiar we are with something the more difficult change can be, but that didn’t seem to be the case with early attendees. Monday’s crowd seemed to flow smoothly through the new entrance gate and down the new pathways. The most talked about change based on conversations with many campers and attendees seemed to be the new flush toilets. Campers and visitors expressed themselves pretty clearly in past Experimental Aircraft Association surveys that better loos were in order and EAA listened.

This year the National Association of State Aviation Officials (NASAO) experienced change as well. Each year for at least twenty years NASAO has hosted state aviation officials and their staff at the annual EAA fly-in in a large red and white tent just a short distance to the west from where the old FAA control tower stood. Today, neither is there. The old tower was torn down early this year having been replaced with a new one just to the west and the NASAO tent was moved this year to a new location just north of the new tower.

The NASAO tent is arguably on a more traveled boulevard now with heavy foot and tram traffic however many of those folks are in route to the War Birds area to the north and the Fly Market to the south. The verdict is still out on the number of folks who will stop by to collect free aeronautical charts and airport directories supplied by the states. NASAO President, Henry Ogrodzinski (Pictured in front of the NASAO tent) wasn’t holding his breath, but never-the-less, said that NASAO staff and volunteers worked very hard Saturday and Sunday, to get the tent ready for those visitors who will ultimately show up.