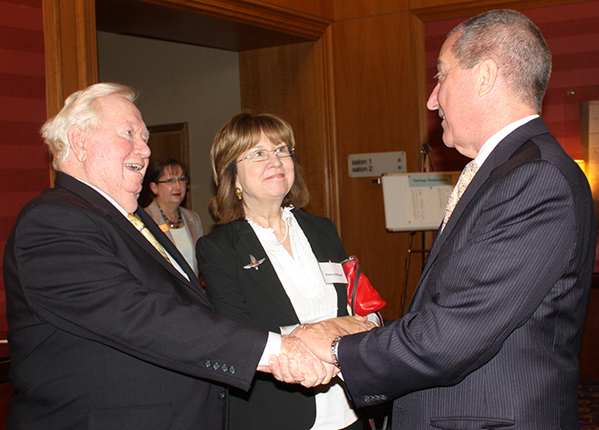 The National Aeronautic Association presented the 2013 Cliff Henderson Trophy to Colonel Joseph Kittinger, USAF (Ret.) at a recent luncheon in Crystal City, Virginia.  On August 16, 1960, Joe Kittinger became an aviation pioneer with the “highest step in the world” when he made history as he ascended to 102,800 feet in a high-altitude balloon and jumped to Earth.

Kittinger, who is enshrined in the National Aviation Hall of Fame, has also set several ballooning and parachuting records, was a noted test pilot and was held as a prisoner of war by North Viet Nam for nearly a year. Sherry Butcher, President of the United States Parachute Association provided introductory remarks.
The Henderson Trophy is awarded to “… a living individual, group of individuals, or an organization whose vision, leadership or skill made a significant and lasting contribution to the promotion and advancement, of aviation and aerospace in the U.S." (Henry Ogrodzinski, NASAO President, right, greets Col. Kittinger and his wife, Sherry.)
Tony Velocci, retired editor-in-chief of Aviation Week and Space Technology was the guest speaker.
Attachment: