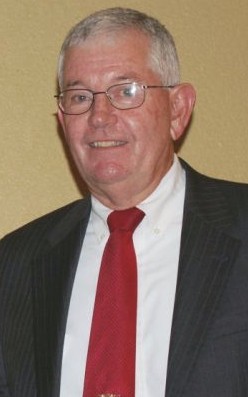 Dave Fulton, Aviation Director for the Texas Department of Transportation received the Kenneth A. Rowe Ambassador for Aviation Award at the 2009 Annual Meeting and Trade Show of the National Association of State Aviation Officials (NASAO) held recently in Tucson, Arizona.

Fulton (pictured at right) came to TxDOT in June 1992 after serving with the Tennessee Department of Transportation Office of Aeronautics for 16 years, including a decade as director of the State Aviation Agency.

The award is named after the former aviation director from Virginia in appreciation of his contributions and service to aviation and the National Association of State Aviation Officials.

Rowe received the award upon his retirement in February 1994. It is the highest honor NASAO members may confer upon one of their peers and is reserved for those who embody Rowe’s spirit, optimism and fierce pride in the capabilities of state aviation agencies.

A retired captain in the U.S. Naval Reserve, Fulton served on active duty for more than 11 years as a naval officer with pilot designation. He was captain of a 17-person crew in the military version of the Lockheed Electra, and served as a naval flight instructor at Corpus Christi Naval Air Station.

Fulton earned a bachelor’s degree in civil engineering from Vanderbilt University, a master’s degree in business administration from the University of Tennessee, and a doctor of jurisprudence from Nashville School of Law. He is past president of the National Association of State Aviation Officials.