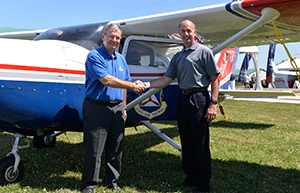 “With a relationship spanning more than 40 years, we are proud that CAP has chosen Cessna Skyhawks, Skylanes and Stationairs to comprise the majority of their 550 aircraft fleet,” said Doug May, vice president, Piston Aircraft. “As our largest single-engine piston customer, it is a testament to the dependability and versatility of our aircraft that CAP continues to choose Cessna products to fulfill their mission.”

The aircraft, produced at Textron Aviation’s manufacturing facility in Independence, Kansas, are scheduled to be delivered throughout the second half of 2016, replacing older models in CAP’s fleet. CAP flies more than 98,500 hours annually in support of search-and-rescue operations, disaster relief, homeland security and flight training.