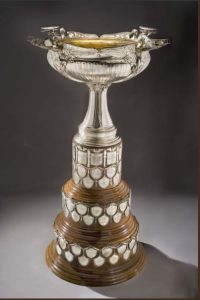 The National Aeronautic Association (NAA) has announced that United States Air Force Captain Samantha Harvey and Major Tyler Schultz, the aircrew of Boar 51 flight, have been named the recipients of the 2017 Mackay Trophy.

The Mackay Trophy was first presented by Clarence Mackay in 1912 and was later deeded to the National Aeronautic Association. Administered by the United States Air Force and NAA, the trophy is awarded for the “…most meritorious flight of the year by an Air Force person, persons, or organization.”

On May 2, 2017, the crew of Boar 51 was re-tasked to support a troops-in-contact situation where 50 American and countless Syrian Democratic Forces were pinned down with heavy machine gun fire, mortars, and rocket-propelled grenades. Boar 51 flight expended 1,500 pounds of ordnance and 1,300, 30-millimeter rounds on 19 targets, often inside danger close criteria. For over five hours, Captain Harvey and Major Schultz overcame communications degradation, severe thunderstorms and near-zero visibility, ultimately saving the lives of friendly forces. The distinctive accomplishments of Captain Harvey and Major Schultz reflect great credit upon themselves and the United States Air Force.

The Mackay Trophy will be presented at the NAA Fall Awards Ceremony at a date and location TBD. For more information or to view a complete list of previous recipients, please visit www.naa.aero.