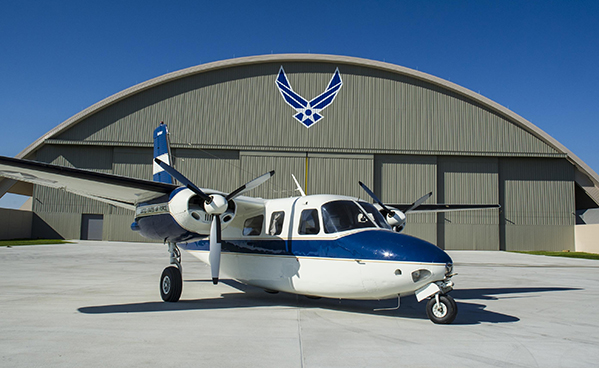 As we approach March 28th, the 50th anniversary of President Dwight D. Eisenhower’s “Flight West,” it is good to reflect on his unique place in our nation’s aviation history. Some may not know that Dwight Eisenhower was a pilot. According to his Presidential Museum, he learned to fly while stationed in the Army in the Philippines. Eisenhower soloed in a Stearman PT-1 on May 19, 1937. Later, he flew a Stinson Reliant and logged over 350 hours from July 1936 to November 1939.

Eisenhower was a Lt. Colonel in the Philippines serving under General Douglas MacArthur. One of Eisenhower’s flight instructors was William L. “Jerry” Lee, who was training the pilots for the nascent Philippine Air Force.

According to Merrill Atwater, former Kansas Aviation Director and President Eisenhower’s great grandson, there is a family story that Ike wanted to become a pilot much sooner. “Ike’s father-in-law told him ’you can’t marry my daughter and learn to be a pilot at the same time.’” Atwater shared that once Eisenhower was in the Philippines, he thought it would be OK.

Also, Eisenhower’s Presidential papers from 1916-52 reveal Ike earned a private pilot license in 1939 at Fort Lewis. This aviation knowledge was extremely important to Eisenhower in World War II planning as the Supreme Commander of Allied Forces.

According to research from Dan Ford at the Warbird’s forum, a reference found of Eisenhower flying in the post-Philippines period is found in At Ease: Stories I Tell to Friends by Dwight D. Eisenhower on page 227, “After World War II, I had ceased to fly altogether, except that once in a while, on a long trip, to relieve my boredom and demolish the pilot’s, I would move into the co-pilot’s seat and take over the controls. But as the jet age arrived, I realized that I had come out of a horse and buggy background, recognized my limitations, and kept to a seat in the back.”

In a November, 2014, Akron Beacon Journal article, former Presidential pilot, Billy Draper, said “The President sometimes came up to sit in the co-pilot’s seat when we were flying.” Draper became Eisenhower’s personal pilot and Air Force aide on call 24/7 after Eisenhower’s election in November 1952.

Interestingly, the National Museum of the US Air Force says, “The U-4B, a U.S. Air Force version of the Aero Commander L-26, was used by President Dwight D. Eisenhower from 1956 to 1960 for short trips. A pilot himself, President Eisenhower would often take the controls, primarily during trips between Washington, D.C., and his farm in Gettysburg, PA. The first presidential aircraft to have only two engines, the U-4B was also the first presidential aircraft to carry the familiar blue and white paint scheme.”

First Lady, Mamie Eisenhower, who was from Colorado, named their Presidential Constellation, “Columbine” as a tribute to the Colorado State flower. Over those years as the planes grew in size and power Columbine II, and even III, were also Lockheed Constellations.

Then, according to www.history.com, Air Force One became the official name of the President’s plane. “While many think of Air Force One as the name of the President’s airplane, ‘Air Force One’ is actually a call sign applied to any aircraft carrying the American president. The name was created following an incident in 1953, when President Dwight D. Eisenhower’s plane found it was using the same call sign—‘8610’—as a nearby Eastern Airlines commercial flight. Eisenhower was our first President to travel aboard a plane designated ‘Air Force One.’”

Another aviation first was prompted by Eisenhower when in 1957 he suggested to Draper, that a helicopter would be useful for shorter trips to and from the White House and the Secret Service agreed. So, on July 12, 1957, Eisenhower became our first President to ride in a helicopter. A Bell UH-13-J Sioux was used to fly Ike to Camp David and his Gettysburg Farm, eventually flying directly from the White House South Lawn.

According to Wikipedia, toward the end of Eisenhower’s term in 1958, the Air Force added three Boeing 707 jets–VC-137s designated SAM 970, 971, and 972, into the fleet. Eisenhower became the first president to use the jet airplane during his “Flight to Peace” Goodwill tour, from 3 December through 22 December 1959. He visited 11 Asian nations, flying 22,000 miles, about twice as fast as he could have covered that distance via one of the Columbines.

In 1948, the Air Force appointed the Stearns-Eisenhower board, named for its chairman to study existing military academies and the options for an Air Force academy. Their conclusions were the Air Force needed its own school. After Congress passed a bill establishing the Air Force Academy, the secretary of the Air Force appointed a commission to recommend a location. After traveling 21,000 miles and considering hundreds of sites, the commission recommended Colorado Springs as its first choice. The secretary agreed and the purchasing of the thousands of acres began. The state of Colorado contributed $1 million to the purchase of the land.

On July 11, 1955, the same year construction on the Academy began in Colorado Springs, the first class of 306 men was sworn-in at a temporary site, Lowry Air Force Base in Denver. Lieutenant Gen. Hubert R. Harmon, a key figure in the development of early plans for an Academy, was recalled from retirement by President Dwight D. Eisenhower to become the first Air Force Academy superintendent.

Since 1937, when Dwight D. Eisenhower first learned to fly, he saw many changes in aviation—jets, supersonic airplanes, and the beginning of space exploration. Over the past 50 years since Eisenhower “Flew West,” we have had moon landings, space walks, drones, and now autonomous airplanes. Eisenhower once said, “Accomplishment will prove to be a journey not a destination.” That is so true in aviation.