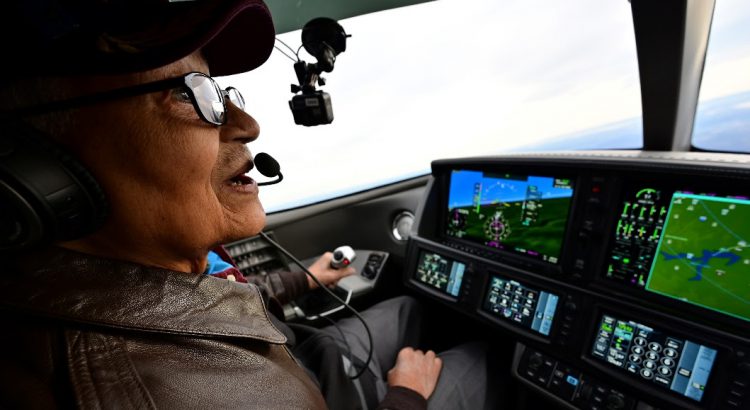 Airshow announcer Rob Reider hosted the one-hour event with AOPA President Mark Baker, who dedicated the evening “to honor four remarkable aviators” who are following in the steps of the legendary Hoover. The ceremony celebrated the 2020 award winners because that event was canceled last year by the coronavirus pandemic.

“While he was a very humble man, Bob Hoover radiated a remarkable spirit and overcame many obstacles in his life’s journey to become an inspiring and motivating, innovative pilot—not the least of which was surviving (and escaping) a POW camp during World War II,” Baker said. “It’s in this spirit for adventure, and for giving back to the aviation community, why this award and this evening exists.”

Rutan was honored with the highest honor of the night, the R.A. “Bob” Hoover Trophy for exhibiting “the airmanship, leadership, and passion for aviation” that Hoover had, as well as for having a “distinguished career as a pilot and aviation advocate while also serving as a source of inspiration and encouragement for current and prospective aviators.”

Rutan has designed 49 aircraft, including Voyager, which flew around the world in 1986, and SpaceShipOne, which put the first civilian astronaut in space in 2004.

Rutan is well known as an innovator, but he was also one of “Hoover’s Heroes.” Actor, pilot, and aviation advocate Harrison Ford and airshow performer and aviation mentor Sean D. Tucker noted in special tributes recorded for the evening presentation. The late Hoover admired Rutan and the aircraft he designed. “He is someone I have admired for his many contributions to aviation over the years,” Baker said, announcing the award.

One of Rutan’s goals that he achieved was designing a stall-resistant airplane—the VariViggen—to reduce the number of stall/loss-of-control accidents. He revolutionized the homebuilt world by designing composite aircraft in part because he discovered that he could build and flight test a composite aircraft within one year. The Long-EZ is one of Rutan’s popular designs, and more than 2,000 of them are flying. “You gotta have some courage” to design and be the first to fly your own aircraft, Rutan said, while accepting the honor.

Rutan recalled the first time he met Hoover 47 years ago at a Reno Air Race where Hoover agreed to fly the Bede BD–5J, which had only made a couple of flights before that. Rutan left viewers in suspense regarding Hoover’s first flight in the jet, saying that the full story will be included in the memoir that he is currently writing and will be available free for download to everyone.

Because Rutan has been on the leading edge of aviation design and innovation for decades, one viewer sought his opinion on the eVTOL designs circulating in the aviation industry. The roughly 150 eVTOL companies worldwide “are all doing it wrong,” Rutan quipped, adding that he has an idea that he believes will be “kind of cool.” If it gets built, Rutan said, it will be his fiftieth research airplane.

McGee, a member of the Tuskegee Airmen, was honored with the inaugural Aviation Inspiration Award that bears his name.

As a member of the Tuskegee Airmen, McGee fought two wars at once during World War II, one against fascism in Europe and the other against racism in the United States. McGee, now 101, persevered to make the world a better place, and he encourages others to do the same. In a pre-recorded message, he encouraged young people to follow four Ps: perceive, prepare with a good education, perform to the best of their ability, and persevere despite their circumstances.

“His 138 combat missions are just one part of General McGee’s story,” Baker said. “He has been a trailblazer for generations of aviators. He has enabled thousands of enthusiasts to follow dreams— who might not have had a chance to climb into the cockpit.”

Baker also presented the award to another “aviator and hero in the name of General McGee”: Ruffin, an F–16 pilot and commander of the 71st Operations Support Squadron. Ruffin soloed a glider at age 14; became a flight instructor; founded a flight school; helped found a STEM summer camp; and founded the Legacy Flight Academy, which works to preserve and grow the legacy of the Tuskegee Airmen and gives young people a first flight in a general aviation aircraft.

“Thank you so much, Mark, and a … special thank you to Brig. Gen. McGee. Truly, you sir, have been an inspiration to me for so long, and it’s just unfathomable that I would be here, receiving an award in your namesake,” Ruffin said. Ruffin explained that his mother taught him that “To whom much is given, much is required, and General McGee has given me, has given us, and truly given the world so much that there is no way that I could live my life without honoring his gifts of freedom, service, and opportunity.”

Popov designed the whole-airframe parachute concept after he survived a hang gliding accident. Popov was hang gliding behind a boat when a miscommunication caused the boater to speed up instead of slow down, making the hang glider pitch up dramatically. Popov fell 500 feet and hit the water, knocking the fillings out of his teeth. He decided then to develop a parachute safety device to help prevent similar accidents. The concept expanded and was approved for ultralights and experimental aircraft. Later, it was approved for installation on certified aircraft, and now more than 30,000 general aviation aircraft are equipped with BRS parachutes. Cirrus was the first manufacturer to install the parachute as standard equipment on aircraft.

Popov said the award was “a precious tribute” to all who worked diligently to help develop the BRS parachute. More than 438 lives have been saved to date, Popov said, asking viewers to imagine the families and businesses whose loved ones and employees were saved as well as the benefit to general aviation through fewer fatal accidents.

Watch the replay of the awards here.