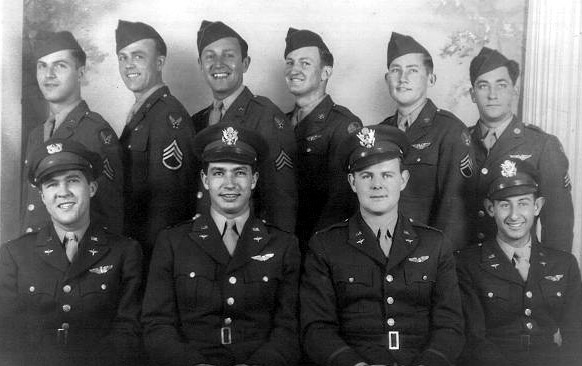 Photo above – Benedict Staudt (front row, second from left), was the co-pilot on the Damien Murray crew, flying the B-24 Monster/Flak Magnet.

I wrote a book about my father’s time in the Second World War as a B-24 navigator, Flying with Dad: A Daughter, A Father and the Hidden Gifts of His Stories from WWII.  Little did I know that hidden gifts would continue to come to me after its publication.

One of the gifts was chronicled in a previous edition of the SAJ’s Weekend Focus.  It was about how I met a 104-year-old WWII veteran, Joe Haenn through the book.  Not only did he live close by, but I learned that he was the assistant crew chief for a plane that my father was on when it crashed.  When Joe told me the condition of the plane, the hair on the back of my neck stood up.  Had dad been in his normal position in the nose, he would not have survived, and I would not have been born 20 months later.

My relationship with Joe is the gift that keeps on giving.  He lives in a personal care home very near to me, and we visit on an almost weekly basis.  Our conversations often center on the ongoing questions I have about his service during the war.  One day I asked, “Did you ever get close to any of the crews?”

His response was immediate and uncharacteristically sharp, “No, I didn’t want to know, because they might not come back.”  His voice softened and he followed up with, “But there was one crew; they didn’t return, and I never knew what happened.”

I asked Joe for a name, and that I would talk to the 467th Bomb Group’s historian J. Peter Horne for any information that he might have.  Joe gave me the name Benedict Stoudt, which I passed onto Peter.  An email arrived that very same day from Peter saying there was no crew by that name.  Would Joe have other names?  Joe supplied two more, and Peter was able to locate the information.

Benedict Staudt was the co-pilot on the Damien Murray crew.  On August 6, 1944, they were flying the B-24 Monster/Flak Magnet on a mission to Hamburg, Germany.  Just prior to the target, they experienced flak and the plane went down.  Nine of the crew members including Staudt survived and were picked up by the Germans.  They remained prisoners of war until they were freed by the Allies toward the end of the war and all returned to the states.

Peter was also able to provide the dates of the crew members deaths showing that each had lived long full lives after their return home.

I handed all of this information to Joe, and I sat quietly while he read.  When he finished, he looked up, his eyes misted, and he said simply, “It’s good to know after all these years.”

My heart caught   He waited 76 years to know what happened to the man who waved goodbye to him from the cockpit of the plane as it rolled down the tarmac to take off for that mission.

The story appeared in a local newspaper, which is how the next gift happened.  On a Sunday afternoon, my phone rang.  I didn’t recognize the number, but I answered.  The woman on the other end was Janice Graves, and she introduced herself as Benedict Staudt’s daughter.  She said her sister, Loretta Staudt, found the newspaper article about Joe and Ben while doing some ancestry research on the internet.  Janice then looked for me on the internet, found my name and phone number, and she just decided to try calling.

The energy and excitement between us was palpable.  Janice told me what a wonderful father her dad had been, and that after the war like so many others, he wouldn’t talk about his experience.  When he became sick, the family encouraged him to write his story down.  He did so by dictating it to his wife.  Janice said that his memoir was saved as a word document, and would I like to have it?  Of course, I would love to read it, and did I have permission to share it with Joe, his family and the 467th?  Her response, “Absolutely.”

My next visit with Joe was exciting.  I printed out the story that was accompanied by a drawing that was done of Ben when he was in the POW camp.  This gift to me became another gift to Joe.

The following week, I presented my book virtually to two local libraries.  When it came to the question-and-answer period I recognized the names of two people who were in the audience.  I was able to meet and talk to both of Ben Staudt’s daughters.

Never did I dream that putting my father’s stories of being in the war into the book, that would I receive the gift of meeting Joe.  Nor did I dream I could help solve a mystery for Joe, and subsequently meet the daughters of the man who was tied to that mystery.