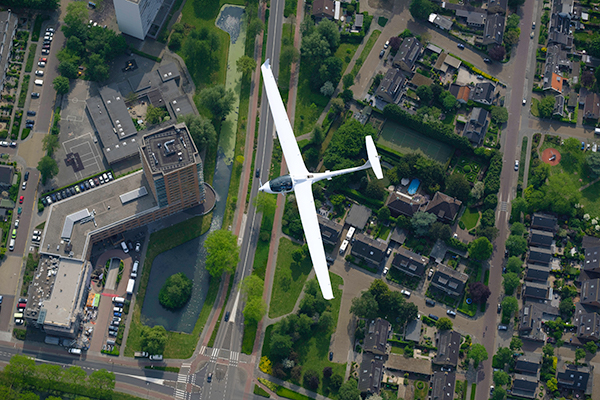 From high in the sky, the Safran PatrollerTM supplied an overall view as well as detailed close-ups of this year’s Bastille Day festivities in Paris on 14 July.

French President Emmanuel Macron and guests of honor US President Donald Trump with his wife Melania, and thousands of other visitors, watched the traditional military parade on the Champs-Élysées. President Macron also paid his respects to the victims of the attack in Nice last year. The Safran Patroller drone, which is based on the ECARYS ES 15, supplied aerial views of the entire area for 5 hours. The images were shown live on French TV.

ECARYS provides an aircraft platform for experimental drones for the French military About 18 months ago, Safran and ECARYS GmbH signed an agreement for the manufacture of one prototype and 14 further ES 15 aircraft as a platform for further refinement of the Safran Patroller System. The first Patroller prototype entered use at the national holiday celebrations on 14 July in Paris, delivering high-resolution images of events on the ground from 5 km up. It was steered from a control centre 40 km distant. French TV stations Antenne 2 and TV5 Monde, which is seen worldwide, broadcast live footage from the drone.

In addition to high-resolution camera footage, the ES 15 Patroller offers other major advantages for missions of this type. Non-stop 20 hour endurance over distances of up to 1350 nautical miles (2500 km), at operating costs under USD 300 per hour, make the aircraft extremely efficient and economical. The Patroller is also much quieter than other reconnaissance platforms.

Interested persons could examine another model of the Patroller close up on the ground. “For ECARYS, it is a great honor that the Patroller based on our ES 15 platform was used to protect the French public and all the guests. This shows why it is important to continue to refine this technology,” said Paul Masschelein, CEO of Stemme AG and managing director of ECARYS GmbH, of the mission in Paris.