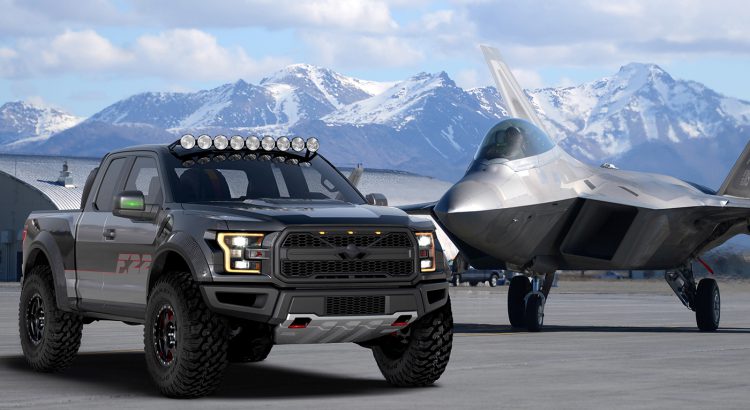 The truck will be put up for bid during the annual EAA Gathering of Eagles on Thursday, July 27. EAA AirVenture Oshkosh 2017, the 65th annual Experimental Aircraft Association fly-in convention, is July 24-30 at Wittman Regional Airport in Oshkosh, Wisconsin.

“Ford’s support of EAA and AirVenture has allowed thousands of young people to discover, enjoy, and pursue aviation,” said Dave Chaimson, EAA’s vice president of marketing and business development. “The unique F-22 version of the tremendously popular Ford F-150 Raptor truck will be an enormously popular highlight of the Gathering of Eagles auction, and we’re very grateful for Ford’s support for our initiatives.”

The modification of a 2017 Ford F-150 Raptor is led by Ford design manager Melvin Betancourt with engineering led by the Ford Performance Team. The goal was to strive for a creative connection to the Lockheed F-22 Raptor fighter aircraft while highlighting the unique style, capabilities, and design features of the 2017 F-150 Raptor.

Among the modifications to the truck are a twin-turbo, Whipple intercooled, high-output EcoBoost engine, along with enhancements to the suspension, wheels, brakes and lighting. The F-150 Raptor also features a purpose-built audio system and interior modifications. It is the latest in a series of Ford specialty vehicles that have to date raised more than $3 million for EAA’s youth aviation initiatives.

“This F-150 Raptor is a new look at Ford’s tradition of building unique vehicles in support of EAA’s youth aviation programs,” Betancourt said. “We know this truck will create an unmatched buzz around this year’s Gathering of Eagles auction.”

Attendees at the Gathering of Eagles are eligible to bid on the F-150 Raptor, as are those prequalified to bid by phone during the sale. For more information, contact EAA’s development office at (800) 236-1025 or at gathering@eaa.org.

EAA’s Gathering of Eagles is held annually at the EAA Aviation Museum, drawing more than 1,000 aviation enthusiasts who support the aviators, engineers, and flight professionals of tomorrow. The event has drawn such personalities as actors Harrison Ford, John Travolta, and Morgan Freemen, sports luminaries Ken Griffey Jr. and Jack Roush, and aviation legends such as astronauts Jim Lovell and Frank Borman.