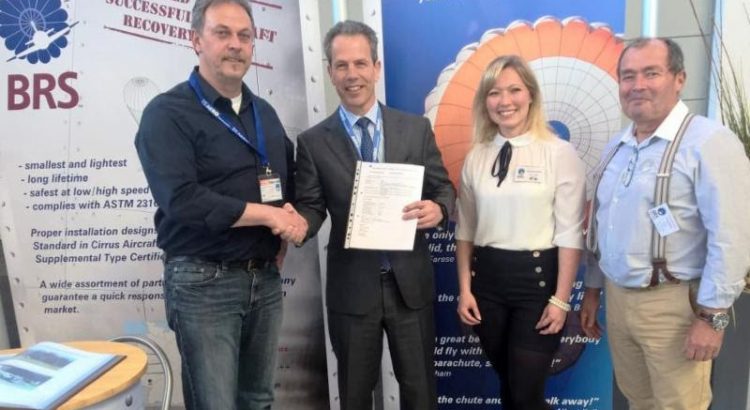 This was the second Type Certificate that BRS Aerospace has received recently to comply with new regulations for Ultralight Parachute Rescue Systems published by German authorities in 2017.

To achieve the most recent certification, BRS demonstrated quicker deployment times for the parachute system at very low airspeeds, replicating airspeeds that occur during flat spins. BRS is the only company to successfully demonstrate this capability to DAeC.

“These new Type Certificates place BRS Aerospace in an advantageous position in Germany and other European countries as new regulations come into effect to increase the previous MTOW limitation of ultralight aircraft to 600 kg,” said BRS Aerospace CEO Fernando Caralt. “BRS Aerospace provides a simple way for current owners of light sport aircraft to upgrade to the new MTOW limits of 600 kg without changing parachute systems if their aircraft allows the new loadings,” he added.

In Germany, a statement of compliance by the aircraft manufacturer is insufficient for operations and the parachute rescue system itself must pass a complete Type Certification, in contrast with accepted American Society for Testing and Materials (ASTM) standards in the U.S. Aeronautical authorities in other European countries are expected to upgrade their gross weight limitations similar to Germany’s.

BRS Aerospace’s whole aircraft parachute system design calls for a parachute ballistic launcher to be installed in the aircraft with a pilot-initiated activator located in the cockpit. Upon activation, a ballistic rocket propels a parachute into the airstream to slow the airplane and float it down into a survivable vertical landing. The system is designed to be a last resort for pilots and passengers when all other attempts to recover the airplane in case of emergency or pilot incapacitation have failed.