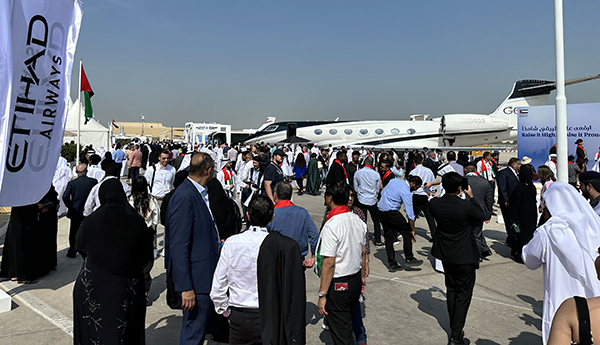 The successful completion of the tenth edition of the Abu Dhabi Air Expo reinforced the position of the Emirate of Abu Dhabi as a key regional hub for aviation. During the three-day expo more than 20,000 delegates, representing local and international aerospace companies, owners, operators, suppliers, and media, explored the exhibition, and static display, and attended the dynamic conference panels.

Etihad, the official airline sponsor welcomed guests to its chalet where it showcased its sustainability initiatives, charter services and medical evacuation expertise, as well as displaying an Airbus A321 aircraft on the static. Etihad also provided key contributions to the conference schedule with panelists discussing sustainability, workforce issues, and the post-pandemic aviation landscape.

The event also acted as a platform for major new announcements. Royal Jet announced the addition of a new Boeing Business Jet to its fleet positioning it as the largest BBJ operator in the world. Memos of understanding were signed between the General Civil Aviation Authority of the UAE, represented by its commercial arm, IACT, International for Aviation Training and Consultation, and the Fujairah Aviation Academy and Falcon Aviation Services, to ensure the future for aviation professionals in the region.

Future Flight was also well represented with Switzerland-headquartered start-up Jekta debuting plans for the development of an electric, multi-purpose, amphibious aircraft, the PHAZE-100 (Passenger Hydro Aircraft Zero Emissions). VoltAero, also exhibiting, confirmed it had received its first tranche of Series B financing, which includes a €32 million capital raise, to cover certification and production launch of the first member in its electric-hybrid aircraft family, the Cassio 330.

Looking to the skies visitors also enjoyed astounding air displays from Al Fursan the aerobatics demonstration team of the United Arab Emirates Air Force, and local skydivers who dropped in on National UAE flag day displaying the Emirates’ red, white and green colours on their silks.

The Abu Dhabi Air Expo supports development of Abu Dhabi as an aviation hub. The next exhibition and conference is scheduled for 2 – 4 March 2024. For more information about the show visit http://abudhabiairexpo.com/