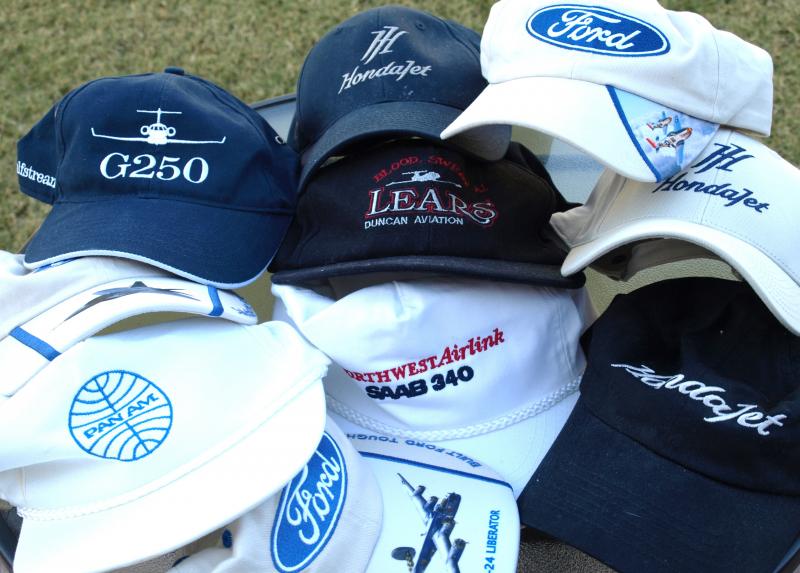 I didn’t set out to collect ball caps! I typically don’t even wear  them.  But over the years I’ve picked up a few here and there.  The other day as I was sorting through some of my aviation stuff I found a large tub full of hats. I realized I had  enough hats to open a haberdashery. Almost ninety of them!
As I was scratching my head -sans cap, trying to come to grips with how this happened, I realized it wasn’t so much the number of hats that surprised me but the impact of all of the stories they represented.  Each hat was special and with each came a flood of memories, some with a smile, some with an outright laugh!

One of my first and all-time favorites is Blood Sweat & Lears, a cap I picked up from  Duncan Aviation in Lincoln, Nebraska, soon after my career in state aviation began. Another favorite is the Bad Boys Club, provided by Diane Hofer, who at the time was the State Airport Engineer for the Nebraska Department of Aeronautics. This cap is special in that it is only one of a handful that went to a select few that somehow found themselves part of an exclusive club within the ranks of state aviation directors.

Many of the hats, Planet Hollywood (Washington DC), APTech, Beijing Olympics, Pan Am, Fly Nebraska, remind me of special times, special people and special places. Although most are aviation oriented, I have special caps from the sports world too. Plenty of Nebraska caps of course. I also have a Creighton University baseball cap from the year they went to the College World Series.  I also have a CBS Sports Final Four cap that I picked up in Denver, while attending the basketball event.

Of course, if you were to ask me now, which one I favor, it would have to be "State Aviation Journal." Who would have thought!