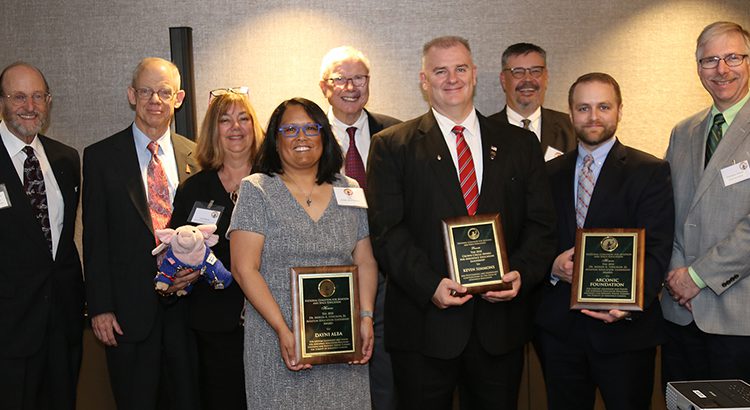 The National Coalition for Aviation and Space Education (NCASE) held their annual awards ceremony in Washington D.C. this week honoring the Arconic Foundation and Dayni Alba for the 2018 Dr. Mervin K. Strickler Award for Aerospace Education Leadership and Mr. Kevin Simmons as the 2018 inductee to the Crown Circle. The Award Ceremony was held on May 10th at the Crystal Gateway Marriott in Arlington, VA, and sponsored by the Ken Cook Co.

Arconic is a new name for a well-known aerospace company, Alcoa, a company that supplied aluminum parts to the Wright brothers in their first powered flight at Kitty Hawk in 1903. Today, it produces scores of aerospace innovations including aluminum alloys for NASA space exploration in our solar system and beyond. The Academy of Model Aeronautics (AMA) is a proud partner with the Arconic Foundation and its community outreach employees to foster STEM education as an important mission and service to our country.

Ms. Alba was instrumental in orchestrating the community input and development of Clear Creek Independent School District’s Ed White Elementary E-STEM Program. She has worked on the Greater Houston Partnership Education Advisory Committee.  As a member, Ms. Alba served as a leading advocate for high-quality pre-kindergarten and was instrumental in the passage of HB4 which secured an additional $118 million in funding for pre-K in Texas.

The Crown Circle for Aerospace Education Leadership Award recognizes those who have made significant contributions to aerospace education in either a local, regional, or national role.  Recipients receiving this award are inducted into the Crown Circle of their peers and colleagues who have been similarly honored since 1969.

This year’s Crown Circle recipient is Kevin Simmons. Mr. Simmons strongly believes there is no greater involvement an educator may have than prolonged meaningful interactions with their students.

Mr. Simmons created an aerospace-themed hands-on and mathematics based summer camp in 2006 at the Florida State College of Jacksonville (FSCJ). Based on lessons learned from TeachSpace, NASA educational content, and the emerging NewSpace companies, his camps focus heavily on orbital mechanics, understanding the properties of space, ascent/descent mission planning and rocketry. In the summer of 2017 Simmons led a team which conducted an Aerospace, Calculus and Engineering (ACES) camp for middle school age students 2015-2017.

These recipients represent the best in aerospace education innovation and leadership, joining aviation pioneers such as Chuck Yeager and the late Scott Crossfield, nationally recognized educators from classroom teachers to school administrators, college professors, and leaders in industry and government.  Each has made an indelible legacy.

The Academy of Model Aeronautics (AMA) congratulated the Arconic Foundation on receiving this year’s Strickler Award from NCASE.

The Arconic Foundation has been an instrumental partner to AMA in the development of programs that highlight the importance of aviation and STEM education. Over the past 13 years, AMA has been the grateful recipient of five grants from the Foundation in support of these efforts. These grants have contributed to the development of AeroLab, a STEM math and science activities kit to demonstrate Newton’s Laws of Motion, AMA Flight Research Kits, which provide the materials for Arconic volunteers, teachers and community leaders to present to classrooms on the important of aviation. The grants also support UAS4STEM, a competitive program for middle and high school students to build their own drones and learn about aviation.

“The entire AMA community congratulates the Arconic Foundation on this prestigious award.” said Bill Pritchett, Director of Education, AMA. “We would especially like to thank the Foundation for its support of several of AMA’s STEM education programs. We look forward to a continued partnership with the Foundation for years to come.”