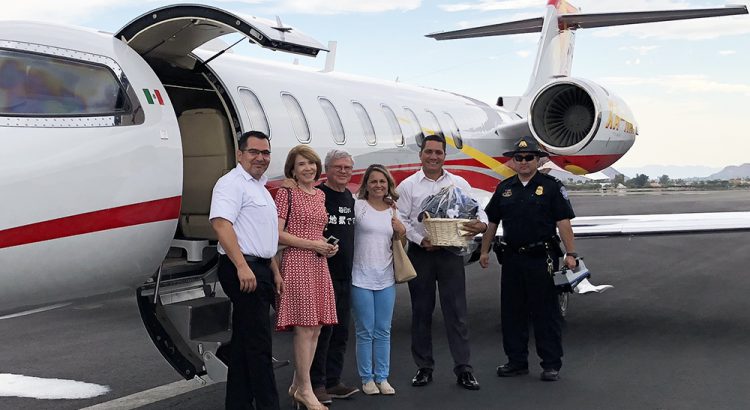 The Scottsdale Airport celebrated the U.S. Customs and Border Protection’s (CBP) one thousandth international aircraft to be processed this federal fiscal year on July 8, marking a new record. This is a first for Scottsdale.

“Scottsdale Airport has reached an important milestone in private aviation,” says Luz Galarza, CBP, Phoenix area port director. “The one thousandths flight arrival is a reflection of the amazing work and cooperation between CBP and the airport.”

Scottsdale Airport has become a more viable international destination since the CBP increased its hours and operational days to include biometric screening technology.

Since these initiatives have been implemented in 2014, there has been a steady increase in CBP’s processing over the years. During fiscal year 2012/13, there were around 490 aircraft processed. The city projects the CBP will process 1,115 aircraft by the end of the federal fiscal year (Oct. 1 – Sept. 30, 2018).

“We are happy to work with the U.S. Customs and Border Protection office to offer this great service to our visitors,” says Gary P. Mascaro, aviation director.

The family and two crew members from Ciudad Obregon, in Sonora, Mexico (in attached photo) were the lucky recipients of being the one thousandths aircraft to be processed. They were surprised with a gift basket filled with goodies from Scottsdale Airport, U.S. Customs and Border Protection, Ross Aviation, Signature Flight Support, Volanti Restaurant and Experience Scottsdale. The family members are frequent visitors to Scottsdale Airport making the trek from Mexico to Arizona several times a year.