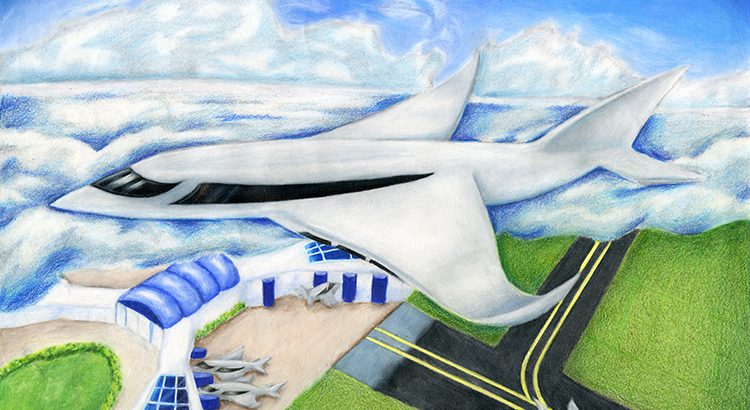 The National Association of State Aviation Officials (NASAO) is proud to announce the U.S. winners of the 2018 International Aviation Art Contest. The winning artwork with this year’s theme of “Flight into the Future” will be forwarded to Fédération Aéronautique Internationale (FAI) in Lausanne, Switzerland to be included in the international judging in April.

The winning entries came from the states of Arizona, California, New Jersey, North Carolina, Tennessee, and Wisconsin. To be eligible for the national judging, students participated in state-wide art contests and placed first, second or third in one of three age groupings. Nearly 4,000 students from 26 states submitted their work this year in the state contests, with the states of North Carolina, Oklahoma and Texas receiving the most.

“The New Jersey Department of Transportation, Bureau of Aeronautics, is proud of all our young artists and their interest in aviation,” said Ashwin ‘Max’ Patel, Manager of Multimodal Grants & Programs, and Bureau of Aeronautics. “We are very excited that Lynn Sun has been recognized at the National level and will be representing New Jersey in the International competition.”

The contest, sanctioned by FAI and the National Aeronautic Association (NAA), is managed by NASAO, with support from the FAA, Embry-Riddle Aeronautical University and the Ken Cook Company. The contest is designed to motivate and encourage young people of FAI member nations to become familiar with and participate in aeronautics, engineering, and science.

“Along with their artistic prowess, the US Winners of the 2018 International Aviation Art Contest really showed their imagination this year,” stated Dr. Jeff DeCarlo, Chairman of NASAO’s sister organization, the NASAO Center for Aviation Research and Education. “Our entire organization is beyond pleased with the submissions, some of which may provide a peek into our aviation future.”

The winners of the 2017 U.S. Aviation Art Contest are:

The artwork for the national competition was judged for its originality, creativity, and use of the theme “Flight into the Future” by a distinguished panel which included: Debbie Gallaway, former U.S. Representative to Fédération Aéronautique Internationale (FAI) and former NASA Education Coordinator; Stephanie Berry, Director of Awards and Events for NAA, and Carolyn Russo, Museum Specialist and Photographer for the Smithsonian Institution, National Air & Space Museum. The winners will receive ribbons and a framed reproduction of their artwork.