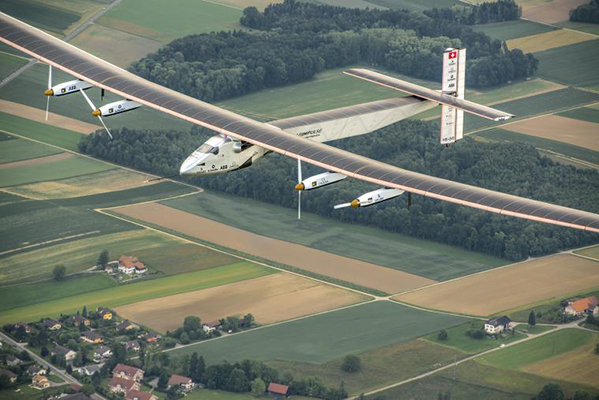 The revolutionary single-seater aircraft, with which Bertrand Piccard and André Borschberg are attempting to carry out the first solar-powered flight around the world in 2015, has successfully completed its maiden flight this morning in Payerne. For 2 hours and 17 minutes, professional test pilot Marcus Scherdel was able to trial the aircraft’s performance in the skies. The initial results are in line with calculations and simulations. There will be several other flights taking place in the coming months in order for this experimental machine to attain certification.

“This inaugural flight is an important stage – a step closer towards the round-the-world flight. It is also a huge emotional step for the entire team and all our partners who have worked on the aircraft. Si2 incorporates a vast amount of new technology to render it more efficient, reliable and in particular better adapted to long haul flights. It is the first aircraft which will have almost unlimited endurance,” highlighted André Borschberg, Solar Impulse Co-founder, CEO and pilot.

“Throughout such an innovative project, each stage is a leap into the unknown. Today suspense was at a high! The results show that our team of engineers can be very proud of the work it has accomplished during the last 10 years,” added Bertrand Piccard, Solar Impulse Founder, President and pilot.