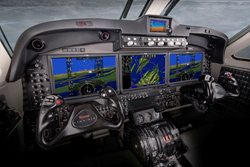 Rockwell Collins will be showcasing commercial aviation’s only certified touchscreen primary flight displays at this year’s Experimental Aircraft Association (EAA) AirVenture in Oshkosh, Wis., July 20-26. The Pro Line Fusion® advanced avionics system will be available for the public to see and touch aboard Rockwell Collins’ King Air 250, which will be on display in the company’s AirVenture exhibit.

Pro Line Fusion with touchscreen flight displays has been selected by Textron Aviation for new-production King Air turboprops with deliveries starting this year and is available as an upgrade for Pro Line II- and Pro Line 21™-equipped King Airs.

Also, for the fifth consecutive year, Rockwell Collins is the sponsor of the EAA AirVenture daily air shows, including the widely popular Night Air Show, on both Wednesday, July 22 and Saturday, July 25. The Rockwell Collins Night Air Show is a one-of-kind signature event, bringing tens of thousands of people to the flight line to see some of the world’s best aerobatic artists performing in sync with pyrotechnics and music.