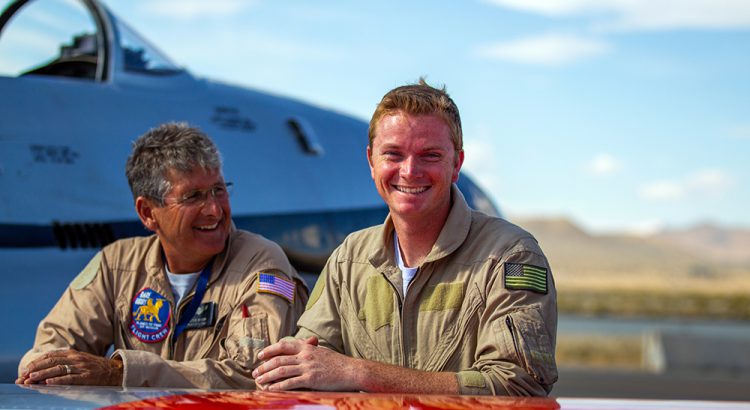 Steve Hinton and Steven Hinton, the father-and-son duo who have each won national air racing championships and set speed records, will be the keynote speakers at EAA’s annual Wright Brothers Memorial Banquet on Friday, December 13, at the EAA Aviation Museum.

Tickets for the banquet are now on sale at EAA.org/WrightBrothers, and are $60 for EAA members and $80 for nonmembers. Doors to the event open at 5 p.m., with dinner served at 6:30 p.m. Assigned seats will be selected at time of purchase. Last year, tickets for the Wright Brothers Memorial Banquet sold out.

Steve Hinton, EAA 181203, is the president of Planes of Fame Air Museum in Chino, California, and a retired air racer who won two Unlimited-class national championships at the National Championship Air Races in Reno, Nevada, over the course of his career. In 1979, Steve set the piston-driven aircraft 3-kilometer world speed record in P-51D Red Baron (re-designated RB-51 due to extensive modifications), a record he held until 1989. Steve is also renowned for his work in a variety of movies and television series, where he either served as a pilot or aerial coordinator. Among his many credits are Black Sheep Squadron, Die Hard 2, The Rocketeer, Con Air, Air Force One, Pearl Harbor, Iron Man, Dunkirk, and First Man.

As one of the most experienced warbird pilots in the world, Steve is regularly called on to perform test flights for newly restored warbirds. Steve rarely gives public presentations about his career and, as an oft-requested speaker by EAA members, this is an incredible opportunity for aviation enthusiasts to see him speak in his first appearance on stage at EAA.

Meanwhile, Steven Hinton has won seven Unlimited-class national championships at the Reno Air Races, doing so in the highly-modified P-51Ds Strega and Voodoo. In 2017, Steven set the world speed record for a propeller-driven, piston-powered aircraft, doing so in Voodoo with a speed of 531.53 mph — breaking the record of 528 mph set by Lyle Shelton in 1989 in the F8F Bearcat Rare Bear, which had previously broken Steve Hinton’s record.