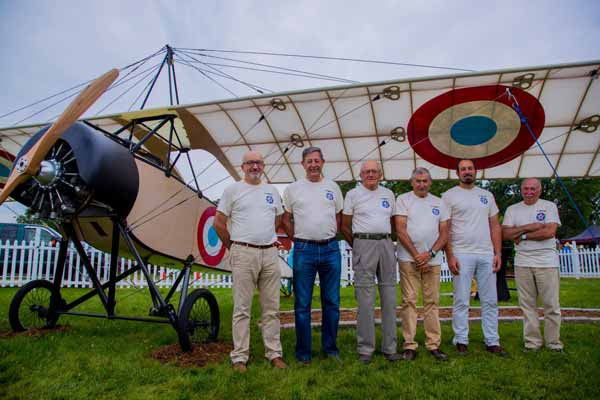 This hand-crafted reproduction of the World War I-era Parasol – an ancestor of Daher’s TBM very fast turboprop aircraft family – was brought by Daher to the U.S. for an appearance at last month’s EAA AirVenture Oshkosh fly-in. During the week-long event, the aeroplane was a major draw, attracting a steady flow of visitors.

While the Type L originally was planned for a return to France, it was decided to honor the EAA’s request that the replica be permanently exhibited at the EAA Aviation Museum. It is to be situated near the facility’s entrance, between the historic reproductions of the Wright brothers’ Wright Flyer and Charles Lindbergh’s Spirit of St. Louis. The six-year construction effort for the Type L Parasol replica was managed by the Association Héritage Avions Morane-Saulnier, whose volunteers – both retired and current workers of Daher and predecessor companies (including some Morane-Saulnier veterans in their mid-80s) – contributed their skills, energy and passion. Daher supported the Type L replica project from the start, providing workspace, tooling and expertise.

The flightworthy replica retains the Type L Parasol’s original wooden structure configuration, along with its wing-warping system and the aircraft’s all-flying rudder and stabilator controls.

“The response to the Type L’s presence from EAA AirVenture Oshkosh attendees, including members of our global TBM community, was very impressive,” said Nicolas Chabbert, senior Vice President of Daher Airplane Business Unit. “When the opportunity came to include this element of aviation history in the EAA Aviation Museum, we were pleased that the Association Héritage Avions Morane-Saulnier agreed – and Daher fully supports the decision.”

As a result of the donation, Daher has offered to sponsor the construction of a second flightworthy Type L replica, which will be produced and based in France.

“Our team of dedicated volunteers are extremely proud to have the Parasol included in the EAA Aviation Museum, which is recognized worldwide for the quality and range of its collection,” commented Daniel Bacou, President of the Association Héritage Avions Morane-Saulnier. “Of course, it was difficult to part ways with the aircraft after six years of hard work, but we thank Daher for the very generous offer that enables us to embark on a new exciting project for the second reproduction.”

“The Parasol was an extremely important aircraft to the Allied powers of World War I and an important symbol of the friendship between France and the United States during the war,” said Bob Campbell, Director of the EAA Aviation Museum. “We are most honored and proud to accept this replica in the same spirit shared between our two great nations during that conflict.”