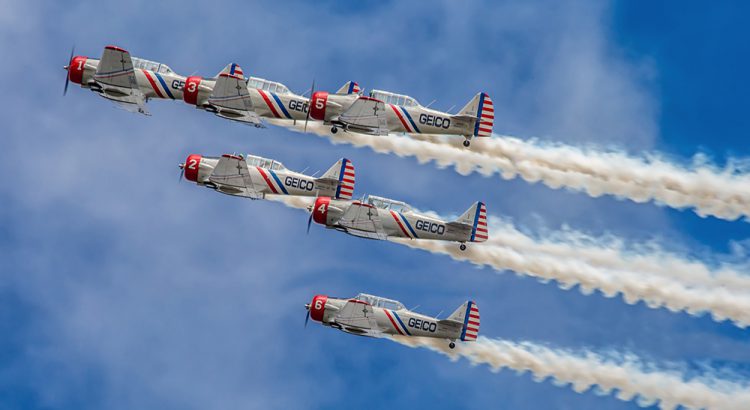 The GEICO Skytypers Air Show Team is taking flight this week at EAA AirVenture Oshkosh 2021 at Wittman Regional Airport in Oshkosh, WI. Aviation enthusiasts will have the opportunity to watch the squadron of six World War II-era aircraft perform their dynamic aerobatic precision flying demonstration on three afternoons of the week-long event.

“AirVenture is one of the largest aviation events in the world. We’re especially excited to perform during EAA AirVenture Oshkosh 2021,” says team flight lead Larry Arken. “We utilize six WWII-era training aircraft to conduct our flying demonstration. It’s an honor to demonstrate the amazing abilities of our vintage warbirds on behalf of our sponsor, GEICO. The nearly 80-year-old planes are a testament to the engineering genius of the Greatest Generation.”

The GEICO Skytypers six SNJs are powered by 600-horsepower Pratt & Whitney engines. As training aircraft, the SNJ can perform all the maneuvers of a fighter plane, but at slower speeds. A majority of the team’s low-level flying demonstration takes place in front of the crowd. The nostalgic sound of the vintage engines fills the air as the team performs more than 20 different tactical maneuvers during its 18-minute, low-level flying demonstration.

The team also creates giant skytyped messages utilizing a unique technology only used by a few organizations in the world. Flying five aircraft in a tight, line-abreast formation, the planes coordinate in typing messages with environmentally friendly puffs of white smoke. A computer located in the lead aircraft utilizes a tablet with patented software to send commands to the other planes via radio signals. The result is astonishing to behold. Messages can be seen from 15 miles away in any direction with 20-25 characters generated in less than two minutes. Individual letters can be as tall as the Empire State Building.

EAA AirVenture Oshkosh 2021 will showcase some of the top air show performers in the world over the skies of Wittman Regional Airport. The event will feature nine air shows over seven days, including night airshows on July 28 and 31. The Skytypers will perform the afternoons of July 26, 27, and 29. In addition to the daily air shows, visitors will have a chance to view a powerful collection of U.S. Air Force and U.S. Navy military aircraft.

Visit https://www.eaa.org/airventure for more information on the air show and VIP tickets.