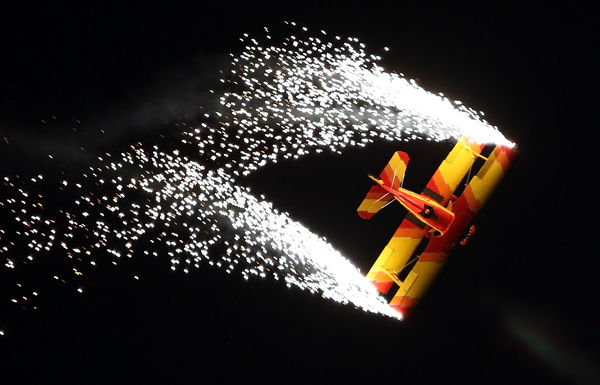 The EAA AirVenture Oshkosh night air show, one of the most popular additions to “The World’s Greatest Aviation Celebration” lineup over the past quarter-century, will be even bigger in 2013 with the addition of a second night show scheduled for Wednesday, July 31. (Photo at right by Shahn Sederberg)

“The additional night show is being scheduled this year in response to those EAA members and AirVenture attendees who said they missed this phenomenal event because they came to Oshkosh earlier in the week,” said Jim DiMatteo, EAA’s vice president of AirVenture features and attractions. “We talked with the participating performers and they’re just as excited to have an additional opportunity to fly the twilight show here as the thousands who have enjoyed it each year.”

The inaugural EAA AirVenture night air show was in 2010 and was an instant hit, drawing tens of thousands of people to the flight line for an unmatched display of piloting skill and dazzling light in the twilight over Oshkosh. All the afternoon and night air shows at EAA AirVenture are presented by Rockwell Collins.

Among the performers already committed to both night shows at Oshkosh are:

Each of the night air shows will conclude with a thunderous fireworks display that has been termed as one of the best in the entire Midwest.