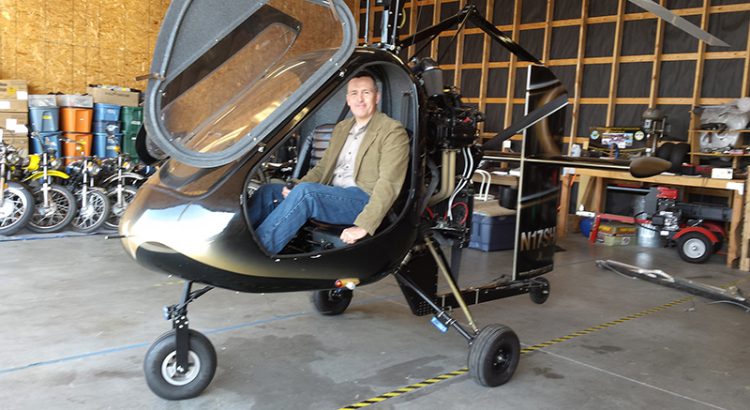 According to Rob Hodgman, Senior Aviation Planner at Washington State Department of Transportation (WSDOT), he got “bit by the aviation bug” when he joined the Army at the age of 19. His barracks were across from the airfield where military helicopters would taxi by day and night, and he remembers thinking “I want to fly one of those.” Therefore, he took a chance early on in his military career and, after completing his enlistment, joined the Army ROTC for a chance at getting into flight school.

“It was a bit of a risky move,” said Hodgman. “There was no guarantee that I was going to get into flight school. It was very competitive. I could have ended up driving a tank or being a supply officer or something like that, but I wanted to fly helicopters so bad that I was willing to take the risk. Fortunately it paid off.”

Hodgman got into flight school in 1989 after attending college at Pacific Lutheran University where he earned a degree in business. He continued his education later on in life, earning an MBA from Saint Marin’s University in 2003.

Hodgman flew these helicopters on many memorable missions throughout his 24 yearlong military career including aerial wildland firefighting missions and night vision goggle multi-aircraft slingload missions. He remembers one particularly exciting mission vividly where he and a Special Forces team of Green Berets performed a helocast at Seattle’s summer festival, Seafair, in front of large crowds of people.

“We flew out over the lake in front of the grand stands and came to about a ten foot hover off the water. The Special Forces guys jumped out the back of the Chinook with their fins and wet suits into the water and performed a mock assault of the beach. While they were doing that we flew to a nearby holding area and waited for them to finish their demonstration, then returned to the grandstand where we landed on the water. A lot of people don’t know that you can land a Chinook on the water, but you can. When the mock assault was done, they came back out into the water and we actually submerged the tail of the helicopter so that they could drive their inflatable motorboat in. As we climbed away with water pouring out the aircraft, they strapped on parachutes, hooked up to the static line and parachuted down. It was a really unique mission.”

Hodgman served active duty for 10 years in the Army, and the remaining fourteen years of his military career as active National Guard. He was stationed in many different places during this time including Fort Campbell, Ky., Fort Rucker, Ala., Fort Lewis, Wash., and Korea. During his active guard time, Hodgman took an assignment in Public Works in the Washington Army National Guard as Deputy Construction and Facilities Management Officer where he worked for eight years, while remaining in army aviation in his weekend guard job. There he was responsible for design and construction projects as well as environmental studies and real estate transactions, experience that has now benefited him in his position as Senior Aviation Planner.

Hodgman’s time in the National Guard allowed him to settle down in Washington’s capitol, Olympia, where he and his wife have lived for 20 years. Living in Washington has made Hodgman appreciate the state for the diversity that it offers.

“I’ve lived in lots of different places, and what I like about Washington is that there’s so much here as far as opportunity. You have Seattle, a very large metropolitan area with anything and everything that you could want, you have the mountains where you can go snow skiing, the ocean where you can go boating, you’ve got Eastern Washington with the high desert, and you’ve got hiking and hunting. It’s a beautiful state.”

On top of enjoying Washington’s many attractions, Hodgman also spends his time doing construction and woodworking, brewing his own beer and hard cider and practicing low and slow barbecue. One of his favorite past times is to combine his love of helicopters and Washington’s natural scenery and go flying over the tree covered mountains in his Sparrow Hawk gyrocopter.

“It’s called the Evergreen State for a reason; it is so lush. As you drive or fly across the Cascade Mountain Range, it is the most beautiful scenery.”

Hodgman’s military and recreational experiences with flying made him so passionate about the aviation industry that he joined on with WSDOT’s Aviation department the day after he retired from the military. He started out in a nonpermanent projects position as an aviation planner and was promoted five months later to Senior Aviation Planner.

“There was a lot of learning to do on my part because army aviation is great, but that’s only one small portion of the pie,” said Hodgman. “Fortunately I had a good team of colleagues that helped me along the way.”

Hodgman has held his position as Senior Planner for six years now and has nothing but good things to say about it.

“It really is one of the coolest jobs,” said Hodgman. “As the Aviation Senior Planner, I’m involved in almost everything, and no two days are the same. One day I’ll be in Seattle meeting with the FAA and large airports doing a big airport study, the next day I’ll be in Central Washington University meeting with the aviation board helping to develop a curriculum, the next I’ll be in Spokane presenting at a drone conference, so I travel all over the map. Every single one of the things that we do is high impact, so we really have the opportunity to make a difference.”

One of the ways Hodgman and his team have strived to make a difference in Washington’s aviation system is by gaining more state funding for future airport projects. In 2014, Hodgman and his team started the Airport Investment Study where they discovered that there was a significant gap between the funds needed and the funds available for Washington’s airport system, resulting in approximately $8.4 million a year that the state needed but was not getting through funding. After identifying the funding gap, the next phase of the study is to find solutions to the problem.