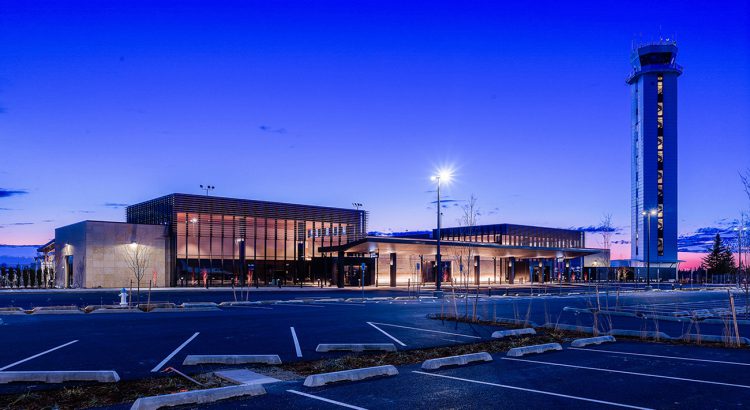 The much anticipated and newest commercial passenger service airport in the United States opened on Monday, as Alaska Airlines’ first flight departed Paine Field for Portland, Oregon. The airport ushers in a new era of air travel for the northern Seattle metro area, giving residents added choice and ease for their business and leisure travel while boosting the local economy.

The passenger terminal was designed and built through a partnership between Propeller Airports and Snohomish County. In addition to developing, financing and building the new terminal, Propeller will also operate it. United Airlines will begin service on March 31, bringing 24 total daily departures to nine destinations on the West Coast, and as far east as Denver.

“The first commercial flight from Paine Field is the realization of five years of hard work and more than a decade of commitment by Propeller to the idea of privately developing a commercial airport in a major metro area with a hub that is at capacity,” said Brett Smith, CEO of Propeller. “For the flying public this is about more options with tremendous convenience and less headaches, and equally important to us – it represents a restoration of civility to the airport experience. We’re excited to share that vision with passengers starting today.”

“We are so proud to be part of such a strong partnership that delivered a vital new resource to the Puget Sound region: a state-of-the-art passenger terminal that will benefit our economy as much as passengers,” said Snohomish County Executive Dave Somers.

“The direct connection to major gateways in the western United States marks a new chapter for the City of Everett. Paine Field will continue to bring jobs and prosperity to the entire region,” said Mayor of Everett Cassie Franklin. “We’re delighted to be part of this historic day and to welcome the first passengers.”

The passenger terminal recently received the National Council on Public Private Partnership’s Innovation Award and has been called “the best airport in the United States” by CNN Travel, thanks to the terminal’s automated ticketing kiosks, upscale lounge-style waiting areas, higher end design and bespoke food options.

“Alaska Airlines greatly appreciates the tremendous partnership with Propeller Airports to bring commercial air service to Paine Field. This is a historic moment,” said Andrew Harrison, Alaska Airlines’ chief commercial officer. “We’re very excited to be able to offer our guests 18 daily nonstop flights between Everett and eight highly popular West Coast destination. Also, from our international gateway airports in San Francisco and Los Angeles, we can connect travelers from North Puget Sound both domestically and internationally with nearly all of our 15 Global Partners to 900 destinations worldwide.”

“We love being a part of a traveler’s special experience as they pass through an airport, and Paine Field is an upscale terminal that represents an exciting new opportunity to do just that here in Everett,” said Kurt Beecher Dammeier, the founder of Beecher’s Handmade Cheese.