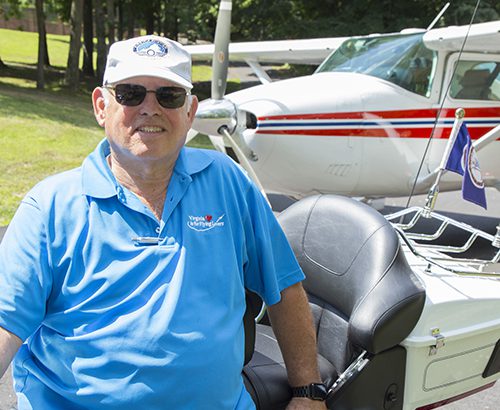 Having just returned from a quick flight to Shannon Airport for lunch with Randy and Linda Burdette in their Cessna 182, I realized that retirement for Randy is just a chance to catch his breath before diving off the springboard into the deep end of a new pool of opportunity in the industry that he loves – aviation.

I sat down at a round table in the back of their hangar located at an airpark just outside of Fredericksburg, Virginia. Any pilot or aviation enthusiast would feel right at home here. The hangar, with the airplane now secure, was filled with what you’d imagine in such an environment; tools, airplane models, photos, plaques, a refrigerator, the couple’s Harley Davidson motorcycles along with a host of other things that reveal a lifetime spent in aviation.

Burdette, who has yet to reach 65, retired as Executive Director from the Virginia Department of Aviation (DOAV) in January and plans on taking a year off to spend more time with family. He’ll also use that time to contemplate his future. As we sip diet cokes, he hints at opportunities that have already surfaced. “I want to do a lot of flying,” said Burdette. He mentions Pilots and Paws and perhaps getting involved in creating policy for emergency response efforts utilizing general aviation, a need he has recognized during his thirteen plus years with the state aviation agency.

Hired in August of 2004 by Governor Warner, Burdette went on to serve four different governors. How does one survive that many different administrations? For Burdette, he tried to stay neutral. “I was non-political,” said Burdette. “When someone asked me what [political] party I was with, I’d say, I’m with the Aviation Party.” He does offer advice to others who find themselves in a similar role. “Do your best every day.” He also said to document everything you’ve done and be prepared to share what it is you want to do.

Under Burdette’s leadership there were many ‘firsts’ accomplished in Virginia, including the first state to have instrument approaches into every public use airport and the first state to have weather reporting at every publicly owned, public use airport. Virginia was also the first state aviation agency to achieve ISO 9000 certification and the first state aviation department to achieve IS-BAO certification and the 120th organization in the world to achieve that certification. At Mr. Burdette’s direction, the Virginia Aviation Security Advisor Committee (VASAC) was created to be a diverse team of professionals to collect and or create best practices for Aviation Security for the Commonwealth. The organization is the first of its kind in the nation involving members from federal, state and local agencies to focus on airport security, safety and emergency preparedness. According to Burdette, TSA called it an example for other states to follow.

When asked how all of that was accomplished, Burdette is quick to acknowledge his tremendous staff and that the administration had given him free reign to run the Department as he wished. He is most proud, however, of the partnership environment that was created. “You’re stronger when you have partnerships,” said Burdette, who acknowledged that they worked hard to make sure there weren’t any adversarial relationships between the Department and other aviation organizations and associations.

Burdette acknowledged the National Association of State Aviation Officials (NASAO), and directors as the best resource. He mentioned a number of fellow state aviation directors by name that provided important advice and information. “They taught me so much.” His advice to others, especially new into the position… “get involved with NASAO and learn from them.”

When asked about what it’s going to take to attract the next generation to aviation, Burdette said you need to go beyond traditional means – “You’ve got to focus on AMA and drones and create pathways to all facets of aviation. Introduce them early – long before high school.”

During our visit to the Shannon Airport and Museum, it didn’t take long to notice that Randy puts into practice what he preaches and that he is still every bit the ambassador of aviation (He wore a hat that read Virginia Aviation Ambassadors). He had multiple conversations, including one with the airport manager, one with the owner of the Shannon airport, and a discussion with several members of the Board of Directors for the Shannon Air Museum. He also spoke with the daughter of a Tuskegee Airman, who happened to be visiting the airport, and during lunch we had a delightful conversation with anther pilot.

For many that are passionate about aviation, including Randy, there is a concern for, and an interest in making sure young people feel welcomed and connected to our general aviation airports. And to that end, perhaps the most impactful thing Randy did was the simple act of waving to a young boy who was eating lunch with his grandpa in the outdoor area of the airport restaurant. As we landed and taxied past, Randy had returned the boy’s wave. When we later entered the restaurant, the boy’s grandfather came up to Randy and said, “Thank you for waving. That meant a lot to the boy.”