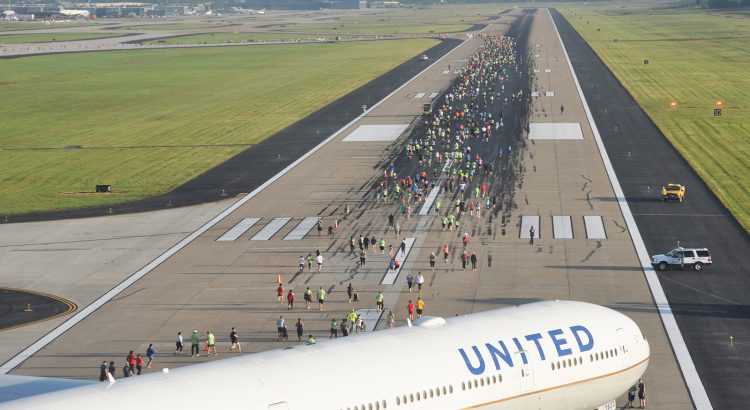 On September 23rd, Washington Dulles International Airport hosted its 25th annual “Dulles Day Festival.” This open-house event is free to the public, and allows thousands of visitors to experience aviation up close. The inaugural Dulles Day was held in 1992, and featured the first-ever “plane pull.” Since then, the festival has expanded to include many other things, including the “Race on the Runway,” which is a pair of 5K and 10K races that attracted 2,500 registrants this year.

I’m not a runner. But I am a passionate aviation enthusiast. So when I learned that the airport was planning to hold a foot race on and around one of its main runways, I bought a pair of running shoes.

The event would be held shortly after my 40th birthday and I thought it would be a uniquely ideal way to commemorate the occasion. It turned out that I was right!

The race would begin on the tarmac at the National Air & Space Museum’s Udvar-Hazy Center. It’s essentially a gargantuan hangar that’s located adjacent to the Airport, and connected by its own taxiway. This allows planes to land at Dulles, roll to the Museum, enter the massive hangar doorway, and be enshrined with hundreds of other aircraft, spacecraft, and ancillary exhibits. The supersonic Concorde is just one example of an aircraft that’s done this.

On race day, the sun dawned to reveal a beautiful, cloudless blue sky. Shortly thereafter, I was in the Udvar-Hazy Center’s parking lot, among a sold-out crowd of 2,500 participants. Many were dressed in brightly-colored running attire. Some even wore costumes, such as the young couple dressed as an airline pilot and flight attendant. And a surprising number of runners brought their young children – in jogging strollers!

With the sun still low on the horizon, we began filing through a security checkpoint at the Museum’s main entrance. The line then proceeded past exotic aircraft and artifacts, before exiting near the Museum’s massive hangar doors. I however made a detour, stopping to stretch in front of a very rare aircraft. The Curtiss SB2C “Helldiver” is a WWII propeller-driven dive bomber that operated from aircraft carriers. Of more than 7,000 built, only about 10 are still known to exist.

Once outside, I was glad that I’d already completed my stretches. It was hard not to gawk at the massive size of the Museum’s 147W’ x 39H’ hangar doors, and the gargantuan building itself! To provide some sense of scale, the space shuttle Discovery is very large; it has wingspan of 76’, and its tail reaches 46’ high. (When the shuttle was rolled into the Museum, a special notch had to be cut in the hangar door!)  Nonetheless, Discovery only takes up only a small fraction of the Museum’s square footage. But I digress.

At 7:30am, the first runners crossed the starting line as a Hughes 500 helicopter made low passes. A photographer was seated casually in a side doorway, presumably attached securely to something inside the helicopter. His feet dangled in the air as he took photos of the thousands of runners and well-wishing onlookers.

The race course quickly led us down the Museum’s taxiway, and onto Runway 1R. Parked at the runway’s threshold was an enormous Boeing 777-222 (ER) wide body jetliner, wearing United Airlines livery. (United was a major sponsor of this event, the proceeds of which benefited Special Olympics Virginia.) The course led directly down the runway’s centerline, alongside the picturesque “triple 7” jet. But I decided to make another detour, and ran under the airliner, from tail to nose. (The aircraft is so big that even after I was a mile down the runway, the jet still loomed large when I looked over my shoulder! Its engine nacelles alone are more than 9’ in diameter – nearly big enough to engulf the fuselage of a Boeing 737!)

Over the next 50 minutes there were many other interesting sights, sounds, and smells. For example, when airplanes land, their tires usually leave black marks on the runway. Over time, parts of the runway become coated solidly black with accumulated rubbery residue. Running on that residue actually provided a slight degree of cushioning, as opposed to running on the bare runway pavement. The rubber also created a curious squeaking sound as it contacted the soles of my running shoes!

Other points of interest included the smell of jet fuel wafting on the air, the sight of airliners pushing back from the adjacent terminals, and heavy jets from the far side of the world landing on a parallel runway. And, since I work with the FAA’s Technical Operations, I was especially gratified to see an Airway Transportation Systems Specialist (ATSS) performing maintenance on the mid-field RVR (Runway Visual Range).

After running from one end of the runway to another, we made a u-turn onto the adjacent Taxiway K. At this point I encountered a young United Airlines flight attendant who was desperately trying to take selfies while she ran – with a huge grin on her face. (Being a gentleman, I of course offered to take a photo for her.) As I turned off Taxiway K and back onto the Museum’s taxiway, the finish line came into view and I switched gears from the jogging paced I’d maintained throughout the race, to an all out sprint. I finished with a respectable time, and enjoyed myself immensely. This event, billed as the “flattest, fastest race in the Beltway,” definitely did not disappoint! I may even do it again next year.

Michael J. Schoen is a support contractor for the FAA’s Non-Federal Program. The Program regulates non-Federally owned NavAids and AWOS, as well as the non-Federally employed technicians who maintain those systems. For more information, and to avoid costly mistakes, visit www.FAA.gov/Go/NonFed

This article was written on the author’s own time. Any opinions expressed are solely his own, and not of those of the FAA.

The Dulles Day Festival is a free, family-friendly open house that promotes Dulles Airport, and aviation in general. In the process it also raises money for Special Olympics Virginia. The event raised nearly $400,000 this year alone, and has raised nearly $2,000,000 since its inception.

In addition to the Race on the Runway, there’s another high-profile Dulles Day event: the Plane Pull. This year, it featured a FedEx Boeing 757-200 and United Airlines Airbus A320.  Nearly 100 teams from local companies and community organizations took turns pulling the planes a distance of 12’ – with ropes – as fast as they could. The Chesapeake, VA, Sherriff’s Office had won this event every year since 2007, and on September 23rd they extended their winning streak by pulling a FedEx 757 freighter 12’ in a mere 5.1 seconds!

Besides the plane pull and runway race, the open house featured many other sights and activities for people of all ages. Not the least of which was the simple pleasure of viewing the adjacent runway, with domestic and international flights taking off and landing.

Additionally, more than 40 modern and vintage aircraft were on display, including the venerable DC-3, the nearly as old – but still on active service – B-52 Stratofortress, the C-17 Globemaster. There was also a performance by the world’s only civilian Harrier (a vertical takeoff and landing jet).

Classic car show with about 50 cars and motorcycles.

Rides in an Airport fire truck.

Food and beverages from a variety of vendors.