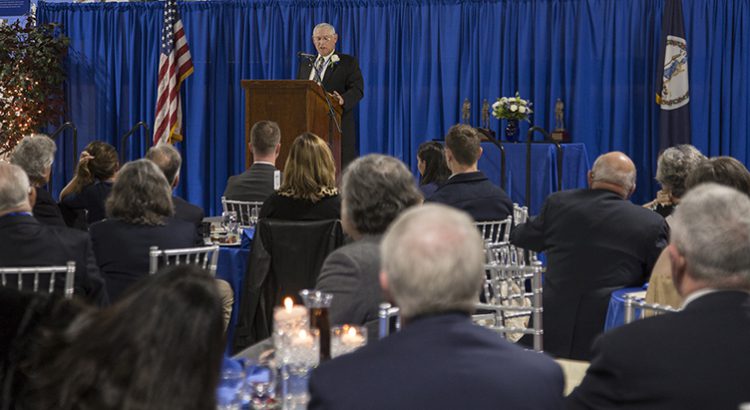 The Aviation Hall of Fame, created to honor Virginians who have made significant contributions to the development of aviation, was held on the Shannon Airport Campus which includes the Shannon Air Museum, in Fredericksburg, Virginia.

Burdette was appointed to head the DOAV by Governor Mark Warner in 2004 and led the agency for nearly 14 years, serving under three subsequent governors.

“Tonight, I get to be the guy that accepts this recognition for the accomplishments of the team,” said Burdette. “I call our team, Virginia Aviation.”

Together, Burdette said they were able to accomplish many things other states could not imagine. “Communications, mutual support, the metal to take on a challenge, and the willingness to dream and create a vision for Virginia Aviation. These are the things that allowed us, no – required us to lead the nation in so many areas,” said Burdette.

The vision created is – We will make the Virginia Aviation System the model air transportation system, providing Virginia communities economic development opportunities, and convenient access to the National Air Transportation System and DOAV will be the standard of excellence amongst State Aviation Agencies.

Burdette had a 26-year Army career which included flying Hueys, Chinooks and Cobra helicopters, served in the office of the US Army Inspector General in the Pentagon and as a faculty member in the area of Program Management at the Defense Acquisition University.

Aside from his Army aviation career, he has owned and flown a Cessna 172, two Cessna 206’s, a Cardinal RG and currently a Cessna 182.

The Virginia Aviation Hall of Fame is one of many programs created by the Virginia Aeronautical Historical Society (VAHS), which was launched in 1977 by a group of dedicated Virginia citizens. Other programs include the Historical Marker Project, the Earle H. Worley Scholarship Program and the Reed I West Aviation History Project.