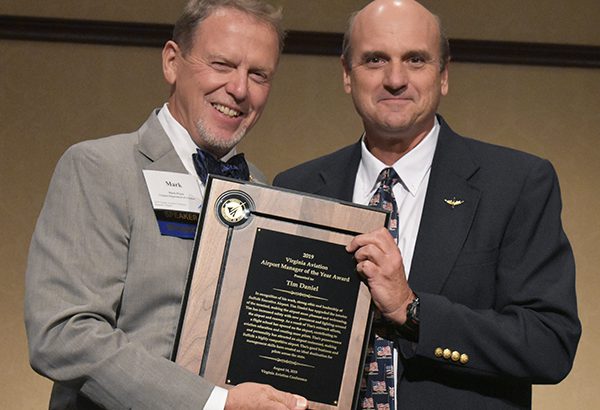 Photo above – Mark Flynn presents Tim Daniel with the Airport Manager of the Year Award.

The 45th Annual Virginia Aviation Conference was held at The Hotel Roanoke & Conference Center August 13th through 16th. The Virginia Department of Aviation (DOAV) hosted the Awards Banquet on August 14th and presented Tim Daniel with the Airport Manager of the Year Award in recognition of his hard work ethic and leadership of Suffolk Executive Airport.

John Rutledge received Person of the Year in recognition of his commitment to the growth, development and maintenance of Richmond International Airport as Director of Planning and Engineering. Lanier Frantz was bestowed the Lifetime Achievement Award in recognition of his contributions and dedication to the Blue Ridge Soaring Society and the Newcastle Airport. The Director’s Award was given to Leroy Baker for his service to the Lunenburg County Airport.

Agency Director, Mark Flynn also presented a plaque to Cheryl McLeskey and Johnny Mazza in recognition of their years of service on the Virginia Aviation Board.

A Luncheon was held on Thursday, August 15th and DOAV presented the Young Eagles Awards to the top three pilots who flew the most Young Eagle Flights from June 2018 through June 2019. Carlos Martinez from EAA 724 flew 49, Barry Toole from EAA 231 flew 45 and Charles Mott flew 35 Young Eagle Flights.