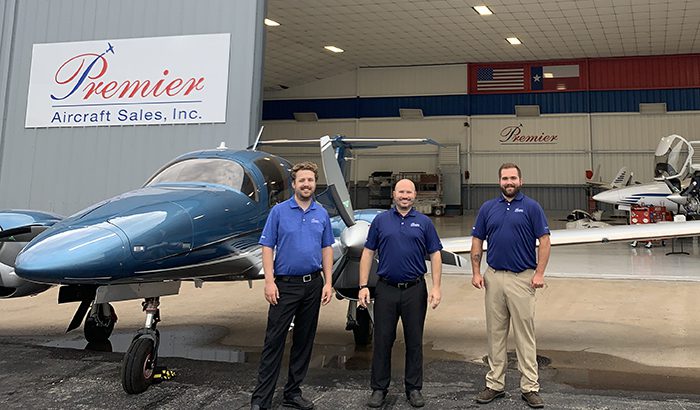 Premier Aircraft has opened a new aircraft sales and maintenance facility at Meacham International Airport. The company opened its hangar doors May 11 to customers and has since performed aircraft maintenance on five Diamond aircraft during its first few days of operation.

“We’re pleased with the response we’ve received so far from new customers, who’ve said we met or exceeded their expectations,” said Premier’s Sales Manager and Texas Director of Business Development Travis Peffer. “Premier’s decision to expand in Texas was driven by what we see as strong business opportunities in the state and surrounding region for general aviation sales and aircraft service.”

Peffer says the company is doing all levels of aircraft services including inspections, routine maintenance and aircraft modification and upgrade work. In addition to serving as an exclusive Diamond aircraft dealer and maintenance facility, Premier will also sell and service other leading brands of piston and turboprop aircraft from the location.

Premier is familiar with the North Texas aviation business as the company operated a sales location for many years in the 2000s at Addison Airport in Dallas. Premier’s new facility has 7,500 square feet of hangar space and 3,500 square feet of office and support space. The company is located at 3804 Falcon Way West Hangar 18S, Fort Worth, Texas, 76106 with a main telephone number of 817-945-9191.

“Diamond and other general aviation customers in this region will benefit in that they’ll now have one of the best customer service companies located closer to them for all their aircraft support needs,” said Premier’s Founder and CEO Fred Ahles. “We’ve had a long and successful relationship with Diamond Aircraft since Premier was founded in 2003. Our Fort Lauderdale location has been maintaining and upgrading Diamond and other aircraft since 2004, so the team in Texas will have considerable knowledge and expertise within the company they can leverage as they expand their customer base.”

In the coming months, Premier is adding sales and maintenance staff at the location to support the expansion. The Texas service operation is led by Director of Maintenance David Seastead, one of the country’s most experienced Diamond Aircraft technicians. To help prepare customers for the summer flying months, Premier is offering new customers discounted oil change and annual inspection services.