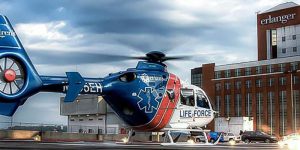 Med-Trans Corporation is adding a sixth helicopter to LIFE FORCE, a partnership with Erlanger Health System. The newest LIFE FORCE twin-engine Airbus H135 will be based in Andrews, N.C. at the Western Carolina Regional Airport.

“Med-Trans Corporation is pleased to be able to provide this enhanced level of care and patient safety in cooperation with Erlanger Health System in a previously underserved area,” said Med-Trans President Rob Hamilton. “The partnership reflects years of success and is a positive development for the future of world-class patient care in the area.”

Erlanger Health System President and CEO Kevin M. Spiegel said, “We are extremely pleased that LIFE FORCE is now expanding ‘critical care in the air’ services even further into the western North Carolina region. Placement of this helicopter is the result of several years of solid relationship building with surrounding hospitals and the support of state and local elected officials and enables thousands of residents to quicker access to regional facilities like Erlanger Health System when they need it most.”

LIFE FORCE is expected to begin flying from the new base on Aug. 15. In mountainous regions helicopters not equipped for IFR can frequently get fogged in at their bases and are unable to answer patient transport requests. With an IFR aircraft now in that region, patients will have quicker access to higher level of care with increased safety during periods where outside visual references are obscured.