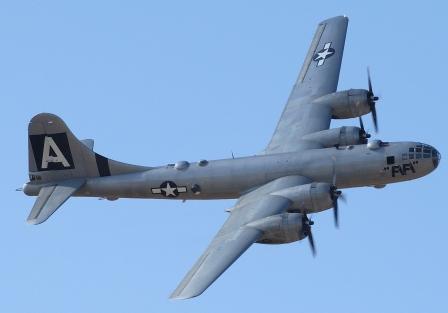 During the last airshow flight of the season, the world’s only flying B-29 Superfortress, FIFI, experienced an engine problem. The crew returned the airplane safely to the ground, but it was soon determined that FIFI’s number two engine would need major repairs. In response, the Commemorative Air Force (CAF) launched a major fund raising campaign to raise money for one of the world’s most famous World War II bombers.

At nearly $10,000 and 100 volunteer hours per hour of flight, keeping FIFI in the air is no easy task. And the cost for repairs to the number two engine and the purchase of a spare will top $250,000. The Keep FIFI Flying campaign’s goal is to raise those funds, ensuring continuous future operation and flight.

"The number of World War II veterans is dwindling every day," said Neils Agather, Commander of the B-29 Squadron of the CAF that operates the aircraft. "Our mission is to preserve the living legacy of the Greatest Generation and we intend to do all we can to preserve their story of sacrifice and honor."

FIFI is a traveling piece of military history. The airplane flies to air shows and tour stops all over the country demonstrating to young and old the sights, smells and sounds of history. These personal experiences perpetuate the spirit in which these aircraft were flown in defense of our nation – honoring the courage, sacrifice and legacy of the greatest generation.

"But the continued flight of FIFI is at risk," Agather continued. "We need your help, each one doing a little bit, to continue to spread the message."

For more information about the campaign, visit www.KeepFifiFlying.com.