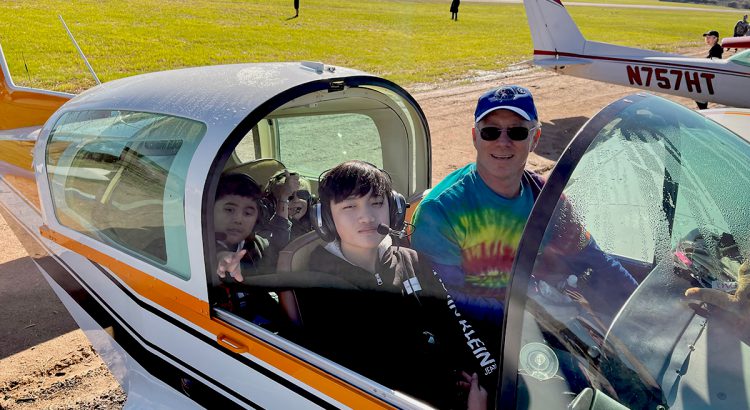 As part of American’s ongoing pilot recruiting efforts, the American Airlines Cadet Academy (AACA) team is working hard to expand awareness of the pilot career in communities across the United States. Just in the past few months, the team has participated in numerous community events geared at educating youth on the opportunity of a promising career in aviation.

One such event was the Experimental Aircraft Association (EAA) Young Eagles Rally and Fly-in in Marlin, Texas, where the AACA team met with local middle school-aged youth from underserved communities.

“Our goal is to increase accessibility to the pilot career path through educational and mentorship opportunities like this one,” said Brad Morrison, Manager of Pilot Recruiting and Development. “There’s nothing quite as fulfilling as meeting young people who have never stepped on an airplane before, much less believed a career as a pilot was an option for them.”

Nearly 50 airplanes flew into the small airport so that hundreds of aviation hopefuls — more than double last year’s attendance — could enjoy a fun-filled day of pancakes, sunshine and discovery flights. For many of the kids, this was, in fact, their first-ever inflight experience, which built lifelong memories and created new dreams of a future career in aviation.

“I’m grateful we can play a role in these kids’ paths to, hopefully, becoming aviators,” said Morrison. “After that weekend, I’m certain that our industry’s future and the next generation of pilots will be incredibly bright.”

Even more recently, in Mesa, Arizona, the AACA team partnered with CAE Flight Academy, one of American’s flight school providers, to host an educational, hands-on session for similar but slightly more advanced groups — aspiring pilots without any previous flight experience and current pilots not yet affiliated with any airline programs.

“Extensive involvement in the communities we serve plays a pivotal role in our long-term success as an airline and facilitates growth and diversification within the pilot profession,” said Capt. Cory Glenn, Director of Pilot Recruiting at American. “Our pilots are passionate, intelligent leaders. Each one can emotionally replay their journey — from imagining what it would be like to be a pilot, gaining an opportunity to visualize and achieve that possibility and then focusing that vision to becoming an American Airlines team member. If we can be that moment for even just a few kids and young pilots, we’re making a difference.”

All three of American’s wholly-owned regional carriers — Envoy, Piedmont and PSA — attended the CAE event. Attendees had the chance to visit the CAE flight school facility, tour aircraft, take simulator rides and meet current American Airlines cadets and instructors. For those who had already applied, the team was also able to fast-track their AACA applications and conduct on-site interviews.

“Our goal is to measurably grow and diversify the pilot population and remove the mystery and barriers to be successful in qualifying for this profession,” added Capt. Glenn. “We’re doing that better than anyone. And we are just getting started with the growth and positive change to come.”