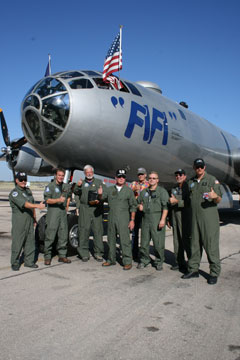 Bombers will take to the skies during the upcoming 2011 Commemorative Air Force (CAF) AIRSHO® at Midland International Airport (MAF) in Texas. Presented by Western National Bank, this weekends CAF airshow will present darkening skies with the appearance of massive bombers of World War II and today!

“This year is all about the bombers,” said CAF Colonel/Volunteer AIRSHO Chairman, Gena Linebarger. “No other show in the country can feature this massive array of aircraft. Two B-17s, a B-24, four B-25s and the Queen of the CAF Fleet, the world’s only flying B-29, FIFI, will take the skies over Midland/Odessa! AND, we aren’t stopping at World War II! The B-1B Lancer and the B-2 (best known as the Stealth Bomber) will be soaring over AIRSHO crowds! This is an AIRSHO you can’t miss!”

In addition to the massive display of bombers, AIRSHO will feature World War II training, observation, transport and fighter aircraft. The exciting aerobatic displays of Corkey Fornof and Jan Collmer will thrill audiences as they spiral through the sky and the A-10 West Demo Team will demonstrate the capabilities of the A-10 Thunderbolt II in an exciting performance! For a complete list of aircraft please visit www.airsho.org.*

The 2011 AIRSHO will also feature a patriotic performance of the CAF’s Red, White & Loud Tour starring Aaron Tippin and the B-29 FIFI. Country music star and patriot, Aaron Tippin, will perform his chart-topping songs Where the Stars and Stripes and the Eagle Fly, Kiss This and many more from a stage built into the wing of the historic B-29! This is a great performance not to be missed! The concert is included in AIRSHO admission and does not require an additional ticket.

Also making its debut appearance at this year’s AIRSHO is the CAF Red Tail Squadron RISE ABOVE Traveling Exhibit. The RISE ABOVE exhibit brings public awareness of the Tuskegee Airmen by taking their story to young people and exposing them to an immersive educational experience. The exhibit, which houses a 30-seat movie theater with a 180-degree screen, travels to air shows, schools, youth gatherings and malls where visitors can sit in climate-controlled comfort to enjoy an experience documentary about the Tuskegee Airmen created by Emmy Award-winning filmmaker Adam White. The experience is free to AIRSHO audiences!

AIRSHO is also excited to continue in its recent tradition of working to support the local economy. AIRSHO ticket prices will remain at the same low price as the last two years and we have once again invited local food vendors to participate in this year’s show! Ticket prices for the 2011 AIRSHO are just $15 for adults and $5 for children ages 6 to 12, Kids 5 and under are Free. Adult tickets will be $20 if purchased at the gate, but tickets for children ages 6 to 12 will remain only $5!

“In 2009, we “took a step back in time” and lowered ticket prices to make attending AIRSHO easier on families, and in 2010, the local food vendors enjoyed long lines and happy customers at AIRSHO,” said CAF President/CEO Stephan Brown. “The crowds enjoyed the unique variety of food available at AIRSHO, from fun fried foods to fantastic sandwiches. Inviting local food vendors back keeps the money in our hometown and keeping lower ticket prices makes the AIRSHO more accessible to our community.”
Discount tickets are on sale now at area Western National Bank branches, FINA 7-Eleven and Domino’s Pizza. Tickets are also available at www.airsho.org and at the Commemorative Air Force Headquarters at Midland International Airport.

On Saturday, Oct. 8 and Sunday, Oct. 9, the CAF AIRSHO gates will open to the public at 8:30 a.m. to give attendees plenty of time to view the static aircraft before the flying begins. CAF AIRSHO takes great pride in bringing the historic warbirds of the CAF fleet along with modern military aircraft to the public.

Collecting, restoring and flying vintage historical aircraft for more than half a century, the Commemorative Air Force (CAF) ranks as one of the largest private air forces in the world. The CAF is dedicated to Honoring American Military Aviation through flight, exhibition and remembrance. A non-profit educational association, the CAF has more than 8,000 members and a fleet of 156 airplanes distributed throughout the country to 74 units located in 27 states for care and operation.