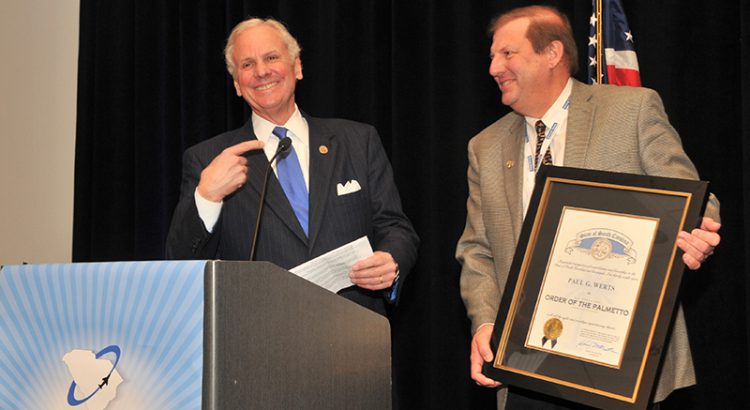 Paul Werts, Program Manager at the South Carolina Aeronautics Commission (SCAC) is retiring after spending over 38 years with the SCAC. His last day will be February 28th.

“I had a wonderful career with the South Carolina Aeronautics Commission,” said Werts. “Public service is a honor and being part of the aviation industry is truly special.”

Werts began working with the SCAC on December 7, 1979, and served in multiple roles during his tenure.  He began as an Airport Planner II, with his initial role as an airport inspector in accordance with the 5010 Airport Master Record Inventory Program.  While filling the role of Airport Planner II, Paul was involved in air service development studies, airport construction projects, statewide system planning, airport grant and aid program management, and statewide economic impact studies.

In 1991, Werts was promoted to Airport Planner III, where he continued to serve airports in South Carolina.  He then became Airport Planner IV in 1994, and in this role, began managing all of the Airport Development staff to assist airports and manage statewide airport regulatory policy.

“I never thought of it as a job,” said Werts. “I’ve been blessed to be part of an industry which extends beyond the universe.”

In 1997, Werts managed the statewide airport data management tool known as CAIRS (Comprehensive Aviation Information Reporting System), of which, the agency was awarded the “Most Innovative State” award from the National Association of State Aviation Officials (NASAO).

On June 2006, Werts was appointed Executive Director of the South Carolina Aeronautics Commission and served in that capacity until June 30, 2014.  While Executive Director, Werts was responsible for multiple agency transitions within state government and most successfully directed the overhaul of the state code Title 55, which regulates the agency and the associated airport development programs.  During this time, Werts also led the staff through development of a land use tool that enabled airport sponsors to review proposed land uses around local airports.  This tool also won a “Most Innovative State” award from NASAO, and continues to serve airports as they strive to protect the investments in and economic values of airports within South Carolina.

On February 8, 2018, Werts was awarded the Order of the Palmetto from Governor Henry McMaster.  This award is the state’s highest civilian honor, and is awarded to citizens of South Carolina for extraordinary lifetime service and achievements of national or statewide significance.  Along with the award, Werts was recognized by the South Carolina Aeronautics Commission by proclamation, and received noticed from the South Carolina Aviation Association (SCAA) that the annual Oyster Roast at the SCAA Annual Conference would, from this year forward, be called the Paul Werts Oyster Bar.

During his tenure at the South Carolina Aeronautics Commission, Werts has also served on many committees for NASAO and other aviation educational programs within South Carolina.  As a result of Paul Werts’ dedication, passion, and success, the publicly owned, public use airports of South Carolina have been developed and supported to meet the aviation transportation needs of South Carolinians and others that travel through our airports.

“NASAO is an outstanding fraternal organization which provided me with a host of resources during my career which I am grateful,” said Werts. “But most of all, I will miss the camaraderie shared with my state counterparts.”