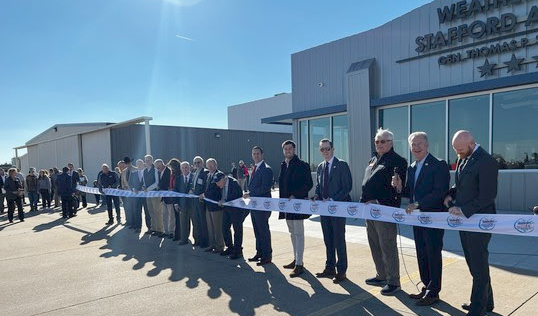 The Weatherford Stafford Regional Airport hosted a ribbon-cutting ceremony in front of a large crowd of local community members and aviation enthusiasts on Tuesday, November 22, in honor of the airport’s new terminal building.

The $1.6 million project began in December of 2021 and took nearly 11 months to complete.   The new terminal building was necessary because the current building, attached to the Stafford Air and Space Museum, would not accommodate the increasing air traffic that the airport was experiencing. The improvements will provide visiting pilots and passengers with a grand new entryway as they fly into Weatherford.

Senator Jim Inhofe, serving as the keynote said, “I am proud to help dedicate Weatherford’s new terminal, which will be a significant asset for the surrounding region. Already home to a first-class air and space museum, Weatherford is a growing community because of its forward-thinking policies and prime location in western Oklahoma. This new terminal will empower economic development, support jobs and grow workforce opportunities as it draws new businesses to the area for years to come.”

Senator Inhofe led the ceremonial ribbon cutting signifying the optimistic future of both the Weatherford Stafford Regional Airport and the City of Weatherford.  In addition to cutting the ribbon on the new terminal, this event allowed pilots and aviation enthusiasts alike an opportunity to provide the Senator with a collective thank you from the industry and a warm sendoff as his final term as US Senator comes to a close. With over 50 years of public service, Inhofe has been the number one supporter of aviation throughout the Country as well as back home in Oklahoma.

One of Oklahoma’s favorite astronautics and local hero, General Tom Stafford, was in attendance to provide remarks on this momentous occasion for Weatherford.

Oklahoma Secretary of Transportation Tim Gatz stated, “This airport is evidence of the advanced commitment by the City of Weatherford for improving aviation infrastructure. Since the community’s founding, civic leaders and citizens have dedicated their resources and time to invest in pro-growth projects. This airport has become a symbol of the character and integrity that embodies the Oklahoma standard.”

This project would not have been possible without the leadership of the City of Weatherford, the Oklahoma Aeronautics Commission, and the FAA working together to find a funding solution to complete such a critical project.

“The Aeronautics Commission is proud to use this special ribbon cutting in Weatherford as a moment to commemorate the service of Senator Jim Inhofe to the aviation community in Oklahoma.  Working with Mayor Mike Brown, General Tom Stafford, and others on this project has been one of the most rewarding experiences. They know the importance of aviation and infrastructure and how an airport terminal plays into the bigger picture of community economic enhancement,” said Aeronautics Commission Director Grayson Ardies.

Weatherford is an important economic hub in western Oklahoma as evidenced by the airport’s $6.3M in annual economic impact and 4 based jets. Although several local maintenance shops call the airport home the main attraction is the world-class Stafford Air and Space Museum which sits on airport property. General Stafford has made the museum a key component over the years to help inspire the next generation of aerospace professionals. Thousands of kids from all over Oklahoma visit the museum every year to see the amazing history of this great industry.  It is safe to say that Weatherford is doing amazing work to help create tomorrow’s aviation and aerospace workforce which is so vital to the state’s second-largest industry.