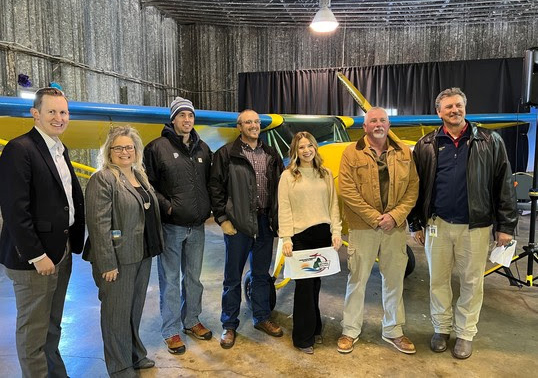 The Watonga Regional Airport hosted a ribbon-cutting ceremony on Tuesday, November 15, in honor of the airport’s new 4,000-foot runway.

This project consisted of reconstructing of the existing 4,000 ft by 60 ft runway in its current location to meet Federal Aviation Administration (FAA) standards.  Also included in the project was the installation of new LED runway edge lights and an obstruction survey of the area to develop new instrument approach procedures that will ensure the airport has 24/7 access in all weather conditions.  The total project cost was just under $2.8M and was funded by grants entirely from the FAA due to ARPA funds provided by Congress.

Oklahoma Secretary of Transportation Tim Gatz has been active in the support of the Aeronautics Commission’s aggressive efforts to improve the quality of infrastructure throughout the 108 public-use airports located within the Oklahoma Airport System.

“This airport has a vibrant community of based aircraft including a based agricultural spraying operation along with a recently renewed fuel farm. With this completed runway project, the city is now set for growth opportunities, and with aviation and aerospace as the state’s second largest economic engine, Watonga is positioned to help further the state’s aero commerce and tourism efforts,” said Sec. Gatz.

“This airport’s runway pavement was exhibiting significant distresses as it had been over 25 years since it’s last major project,” said Director Ardies. “As the state’s agency for aviation and aerospace we were well positioned to program these federal funds for the rehabilitation of a major runway asset in western Oklahoma.”

Watonga Regional Airport has a $1.2 million annual economic impact, and the airport is home to several aviation agriculture businesses along with being used by numerous oil and gas operations as well as other local entities.

Much of the state’s population of almost four million is focused in the Tulsa and Oklahoma City metropolitan areas with the remainder residing in smaller communities scattered across the state. Without the ability to support its services by air, Oklahoma Highway Patrol (OHP) and other first responders would not be able to provide effective law enforcement.

Many smaller hospitals are not able to have specialty doctors on staff. Oklahoma Heart Hospital is affiliated with many towns throughout Oklahoma. Doctors from this hospital and many others routinely fly throughout the state to see their patients, including in the Watonga area. This airport allows doctors to fly to patients who would not have otherwise had the ability to receive their care locally.

Senator Darcy Jech said, “Oklahoma Aeronautics and the FAA continue to show their support of the Oklahoma Airport System by investing in aviation infrastructure. This airport is something the citizens of Watonga can be proud of for years to come.”