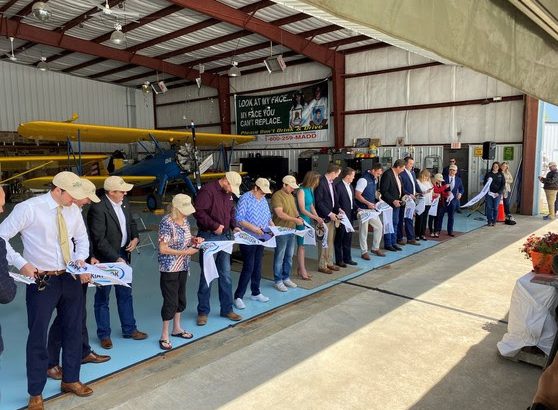 The Skiatook Municipal Airport hosted a ribbon-cutting ceremony on Friday, May 14, in honor of the airport’s new 3,000-foot runway.

The $2 million project began in 2020 with reconstruction of the existing asphalt runway with concrete and the upgrading of the existing stake mounted runway edge lights to higher quality base mounted fixtures. The grant also included funding for an obstruction survey to aid in the development of new Global Positioning System (GPS) instrument approaches at both ends of the runway. The project, included in the Oklahoma Aeronautics Commission’s (OAC) Five-Year Airport Construction Program, provides better safety to the users of the airport while continuing to improve the economic impact for the City of Skiatook and Osage and Tulsa Counties.

“The new runway at Skiatook Municipal Airport will be a huge asset for this community’s economic growth,” said Gov. Kevin Stitt. “It will attract new companies and retail development projects, improve the quality of life for residents and businesses owners, and continue the development of our state’s overall airport system which is critical to compete as a Top Ten State.”

Gov. Stitt served as the keynote and led the ceremonial ribbon cutting signifying the optimistic future of both the Skiatook Municipal Airport, the City of Skiatook and the greater Tulsa area.

Master of Ceremonies Secretary of Transportation Tim Gatz has been active in the support of the OAC’s aggressive efforts to improve pavement quality throughout the 108 public-use airports located within the state system of airports. The OAC’s pavement management program forecasted a pavement condition index (PCI) rating of 33 for Skiatook’s runway 17/35 for year 2021.

“This airport’s runway pavement was exhibiting medium and high severity longitudinal and transverse cracks, raveling and some areas of base failures,” Sec. Gatz said. “Since the pavement rating was significantly below 65 and experiencing rapid deterioration, this was an appropriate priority for the Aeronautics Commission. Skiatook has an airport they can be proud of for many years.”

In addition to the ribbon cutting, attendees enjoyed a skydive performance from Skydive Airtight and heard from additional dignitaries including Representative Sean Roberts, the Mayor of Skiatook Robin Edens, and State Director of Aeronautics Grayson Ardies.

“Working with Mayor Forbes and the City Manager Dan Yancey on this project has been excellent,” said Ardies. “This airport has 20 based aircraft and averages 105 aircraft operations per week, and with aviation and aerospace as the state’s second largest economic engine, this community is now positioned for further aero commerce and tourism.”

A project of the Federal Aviation Administration, the City of Skiatook, the Oklahoma Aeronautics Commission, and the airport consultant, CEC Corporation, the runway is now open for air traffic.

“A new runway is more than just a victory for aviators—it’s an asset for the entire community,” noted U.S. Senator Jim Inhofe. “Skiatook is growing in population because of their proximity to Tulsa, but the infrastructure wasn’t keeping up. This new runway will support economic growth and make it possible for more businesses to locate in the area for years to come.”

Skiatook Municipal Airport has a $1.5 million annual economic impact and the airport is home to Skydive Airtight, a USPA Group Member skydiving facility operating since 1999. They offer three types of training for first-time jumpers including Tandem Skydiving, IAD Solo and Accelerated Freefall Progression. The Skiatook Flying Club is a non-profit also based at the airport promoting aviation for students and experienced pilots and visitors often fly to the area to visit Lake Skiatook.